From the RuneScape Wiki, the wiki for all things RuneScape
Jump to: navigation, search
Law staff? (edit)

The law staff is a magic weapon that costs 10,000 Dungeoneering tokens and requires level 45 Dungeoneering and 45 Magic to acquire and wield. Players can store up to 1000 law runes in it and remove them at anytime. When wielded, there is a 1/10 (10%) chance that all law runes are saved when casting a spell that requires such runes. This effect also works with Magic tablet creation. Law staves do not stack in the bank, even if they have the same rune count.

The law staff essentially saves 48.2 coins per law rune used in a spell on average. Whether it is more cost effective to use it, staff of air or another type of elemental staff would depend on the ratio of rune usage. See the cost analysis section.

Most free players prefer using the nature staff to law staff in combat due to the higher tier (53 for nature, compared to 45 for law). 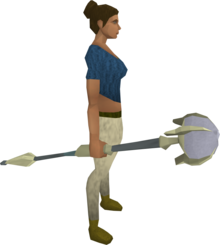 The following is a comparison of the cost per cast of spells using law runes while using an elemental staff as opposed to using a law staff. The cost per cast when using the Law staff is approximate and assumes that exactly 1 out of 10 Law runes are saved.

Example on reading the table: