From the RuneScape Wiki, the wiki for all things RuneScape
Jump to navigation Jump to search
The Old School RuneScape Wiki also has an article on: osrsw:Treus Dayth 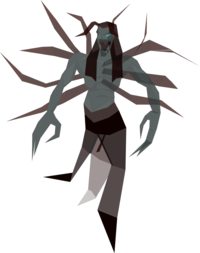 Treus Dayth is the undead guardian of the Salve crystals deep inside the Mort Ridge Mines as well as the boss monster in the Haunted Mine quest. He has the power to possess objects around him and send them hurtling towards players. He is summoned when the player attempts to pick up the Innocent-looking Key.

He uses these three main attacks:

If at any time you need to recharge your health, you can exit the door you entered the room by, and heal. Dayth's health will stay as you left it.

Lord Drakan had the abandoned mine destroyed after the holy River Salve started to seep into the lower shaft of the mine. Although most of the water was tainted by the land's twisted soil, some remained pure and retained Saradomin's blessing. Purple crystals were growing in the mine and absorbed the blessing. When exposed to the unholy creatures of the land, the crystals would severely weaken or even kill them. To prevent the crystals from falling into the hands of Saradominists, Drakan then imprisoned Treus Dayth, who was one of his followers, to guard the crystals on the lowest level. Even after Treus Dayth died, his tortured soul continued to serve as the mine's guardian.

Treus Dayth has a nasty habit of teleporting in spots where the machinery can hit you. All that needs to be done is look where he is standing, and carefully walk around equipment to get to him. It is recommended to use Magic to kill him, as his affinity to Magic is considerably higher than to Melee or Ranged.

Treus Dayth is fight-able as a class G boss monster in the Dominion Tower minigame if the player has completed Haunted Mine.

At the tower, Treus Dayth is much easier to defeat. There is no heavy equipment that will attack you, and he will only have three animated pickaxes to help him. The pickaxes do not have to be killed or even fought at all to win the fight.

In some matches, Treus Dayth will be close enough to melee. He will occasionally fade away but soon reappear next to you and is easily killed.

In other matches, Treus Dayth will constantly flee from you, appearing along the sides of arena.

Ranged attacks are an effective way to deal with Treus Dayth.

Treus Dayth is partially immune to monster stun, as he can vanish while stunned and later reappear after the stun effect period has ended.

When re-appearing, in the short time it takes, a right click on him will have an option to examine a Level: 95 Ghost.

This information has been compiled as part of the update history project. Some updates may not be included - see here for how to help out!
Retrieved from ‘https://runescape.wiki/w/Treus_Dayth?oldid=35682049’
Categories:
Hidden categories: