From the RuneScape Wiki, the wiki for all things RuneScape
Jump to navigation Jump to search
Loading...
NPCIn combat

Yelps, real name Dimwit[1], was a cheerful and wealthy 35-year-old goblin businessman who ran the Squeal of Fortune, a special wheel that rewarded adventurers with prizes every day.[2] He described himself as the richest, smartest and smallest goblin to ever live[3], and appeared to have an obsession with spinning wheels and being punched. Due to this, most of the other goblins dislike him, and Bandos himself apparently despised him.

After the Squeal of Fortune was removed from the game, players decided Yelps's future via the Power to the Players poll system, which included the options of allowing him to retire gracefully, being strapped to a circus target wheel, being killed, or never being seen again. Ultimately, players voted to kill Yelps, with 42% of the vote, and as such he features as one of the three bosses in The Mighty Fall, serving as the champion of the goblins in the tournament between the Bandosians.

Yelps is fight-able along with his bodyguards as a class X2 boss monster in the Dominion Tower minigame if the player has completed the quest The Mighty Fall.

Goblin Village, where Yelps grew up.

Dimwit was born in year 134 or 133 of the Fifth Age to two unknown goblin parents. He grew up in the Goblin Village, an Asgarnian goblin settlement found to the north of Falador.

At some point during Dimwit's childhood, an accident occurred that resulted in him hitting his head, which resulted in him falling down a set of stairs and biting his tongue, causing him to scream in pain loudly, which earnt him the name Yelps. Tired of his screaming, the leaders of the village tied Yelps to a spinning wheel and played games with him, and from then on he became the butt of many jokes around the village.[1]

The Squeal of Fortune[edit | edit source] 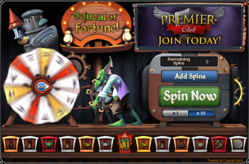 Yelps spinning the Squeal of Fortune.

Not much is known of Yelps after his childhood, but at some point he came into the possession of a large hoard of treasure that formerly belonged to a princess known as Alice and took it for himself.[4] In 169 of the Fifth Age, he used his new-found wealth to establish the Squeal of Fortune, a large wheel that could be spun for prizes from his stash of loot.[5] Adventurers were able to gain tickets for the wheel through a variety of means, including completing quests, killing monsters, buying them, or completing challenges for the Burthorpe Imperial Guard, in addition to one or more free spins every day. Yelps would often run special promotions, offering certain prizes for a limited period only.

Soon after the end of the battle between Armadyl and Bandos a couple of months later, the Squeal of Fortune was shut down after it was discovered that Yelps did not actually own the treasure he was distributing[4] and replaced with a similar game known as Treasure Hunter, hosted by the same Alice whose treasure had been stolen. Her own game functions in much the same way as the Squeal, but does not involve any punching or wheels, instead featuring treasure chests, much to Yelps's disdain.[6]

Left without a job, Yelps tried to reintegrate himself back into goblin society, but this did not go very well, particularly due to the other goblins' dislike of him.[7]

Some time later, Yelps attended the Kyzaj Tournament, a competition held between the Bandosians on Yu'biusk to decide who would lead them in the wake of Bandos' death. The goblin high priest tasked him with guarding the goblin camp during the tournament,[8] and Yelps believed that he would not be taking part in the actual tournament.[9] 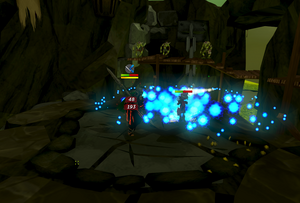 Despite this, the other goblins voted him as their champion, and he was forced to take part in the first round of the tournament.[10] He fought against the World Guardian, who was acting as the champion of the Dorgeshuun in Zanik's place. Yelps was assisted by his bodyguards in the battle, and attacked using a special ability that involved spinning and teleporting around the arena.

Yelps was ultimately defeated, and he begged for the World Guardian to spare him. The latter then had a choice between killing or sparing him. If he was executed, he would scream and claim he would give the World Guardian spin tickets, while Generals Wartface and Bentnoze were extremely pleased that "dumb-dumb Yelps [was] gone".[11] The victor was then able to loot his treasure chest.

If spared, he would be extremely grateful, and thanked the World Guardian with his remaining cash and an expired spin ticket. This ticket starts the Mod Deg trading sequence. He then cheered them on for the remainder of the tournament, and once the World Guardian proved victorious, he returned to Goblin Village, where he got a job as General Wartface and General Bentnoze's new assistant, replacing Grubfoot, who had left for Dorgesh-Kaan the year prior.[12] Although he remarked that it was honest work, he admitted that he missed the game show scene, and expressed an interest in joining "a couple of fellows who do some sort of show in some sort of pit."[13]

Yelps is fought during The Mighty Fall. At the beginning of the fight, he will have two bodyguards. While they are alive, the player's attacks will be severely reduced. More bodyguards will be summoned over the course of the fight. Additionally, Yelps can drain the player's defence. Finally, Yelps' special attack consists of him screaming "Woohoo, extra spin for the win!" The special attack can be identified by Yelps throwing coins on the ground and creating blue clouds. He will spin on the spot, hitting the player for rapid hits of approximately 500, which should be avoided. However, Yelps will chase the player around the arena by teleporting, although the speed of his teleports is low and can be avoided with only minor damage dealt.

The player will have increased damage when damaging Yelps after his bodyguards are slain; hitting the damage cap of 12,000 is easily possible.

Woohoo, extra spin for the win!
Yelps' voice on claiming a spin ticket

Woohoo, extra spin for the win!
Yelps' voice on claiming a spin ticket while wearing a diving helmet

Please don't kill me! What are you doing? I'll give you all the spin tickets! All of them! NOOOOOOOOOOO! No more spins!
Yelps pleads for mercy and is executed by the player.