From the RuneScape Wiki, the wiki for all things RuneScape
Jump to: navigation, search
Penance master trident? (edit)

The penance master trident is a staff from Barbarian Assault. It requires 70 Magic to wield, and provides players with stat bonuses identical to ahrim's staff. This weapon is an upgraded version of the regular penance trident, and requires 220 Honour Points in each role to purchase.

When wielded, it will provide infinite water runes similar to an elemental staff. Like the regular penance trident, it will also attempt to 'save' runes used in any spell: 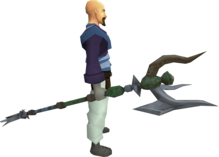