From the RuneScape Wiki, the wiki for all things RuneScape
Jump to navigation Jump to search
The Old School RuneScape Wiki also has an article on: osrsw:Culinaromancer

The Culinaromancer is, according to legend, an evil mage who draws his power from food.

A hundred years ago, the Culinaromancer was a cook in the Lumbridge Castle for the Duke. He used the exotic and esoteric foodstuffs to which he had access to improve his magical power. He was sealed away by one of the Lumbridge Castle cook's forefathers when he threatened to destroy the Secret Council of Gielinor, that gets together for a feast every ten years. Eliminating the secret council would have been the first step in his plan for world domination. The Culinaromancer returns in the quest Recipe for Disaster, and is the final boss to defeat. 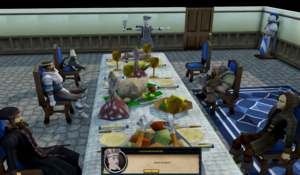 The evil wizard has returned!

In combat, he primarily attacks with magic, which can hit into the high 600s, and a weaker, rarely used melee attack that can hit up to around 300. When he is killed, food spins out of his head and the player is teleported back to the dining room.

The Culinaromancer is fightable as a class G boss monster in the Dominion Tower minigame if the player has completed Recipe For Disaster.

No more meals for you, fool!
The Culinaromancer taunting.