From the RuneScape Wiki, the wiki for all things RuneScape
Jump to: navigation, search
The Old School RuneScape Wiki also has an article on: osrsw:The Draugen 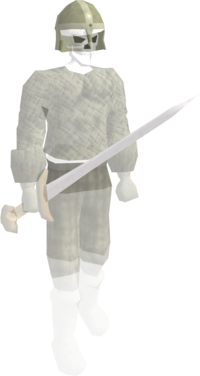 The Draugen is an evil ghost from Fremennik mythology that devours the spirits of the drowned, and stalks the coastlines, invisible to all, and unable to be defeated by normal means. He must be defeated to gain council member Sigli's vote in The Fremennik Trials quest. It can only be found by using a special Hunter's talisman given by Sigli the Huntsman. This works very much like a runecrafting talisman, telling the player in which direction to travel to find the Draugen. The monster appears in a different place for every player.

The Draugen may be fought as a class G boss monster in the Dominion Tower minigame if the player has completed The Fremennik Trials.

Taste the wrath of the deadliest ghost on this world!

The Draugen will stay within Fremennik province near the riverbank of the river that separates the Fremennik Province from the Seer's Village and Sinclair Mansion area. Remember the Draugen is not visible until you get close to its location. Its exact location varies for each person who adventures on this long quest. Before he is found, he takes the form of a grey Butterfly with the examine text of "Flutter by oh butterfly", although note there are multiple of these butterflies, and only one of which is the The Draugen.

When found, there will be a message: "The Draugen is here! Beware!". When it is defeated, his undead soul will go into the Hunter's talisman received from Sigli.

The Draugen cannot be poisoned and is weak to fire spells. It is recommended that when you encounter the Draugen, to lure it near a fence, stand on one side of the fence while it is on the other, and proceed to attack using Magic attacks.

Just before you defeat the Draugen, it will be absorbed into the talisman.

A player will often be able to make the Draugen appear when they are standing near or on a space occupied by a butterfly.