From the RuneScape Wiki, the wiki for all things RuneScape
Jump to: navigation, search
"Mud staff" redirects here. For other uses, see Mud staff (disambiguation).
The Old School RuneScape Wiki also has an article on: osrsw:Mud battlestaff
Mud battlestaff? (edit)

A mud battlestaff is a medium power mud elemental staff. It is the weaker version of a mystic mud staff. It requires 30 Magic to wield and provides an unlimited amount of water and earth runes. Earth and water runes are used together in the Lvl-5 Enchant spell, Bones To Bananas/Peaches spell, and the String Jewellery Lunar spell. A mud battlestaff can be upgraded to a mystic mud staff by Thormac for 40,000 coins after completing the Scorpion Catcher quest, or for 27,000 coins after completing the Seers' Village hard tasks.

Assuming the Seers' Village hard achievements have been completed, each mud battlestaff upgraded into a mystic mud staff would yield a profit of 14,115 coins.

Mud battlestaves are dropped exclusively by Dagannoth Prime. This is the second released hybrid elemental staff, released before the steam battlestaff and after the lava battlestaff.

Spells which use both earth and water runes:

With 85 Crafting, players may attach a shade skull to the mud battlestaff, creating a skeletal battlestaff of mud. 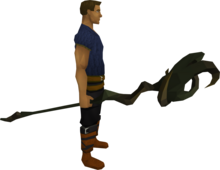 The update history project is a work-in-progress – not all updates to this topic may be covered below. See here for how to help out!
Retrieved from ‘https://runescape.wiki/w/Mud_battlestaff?oldid=32668848’
Categories:
Hidden categories: