The steam battlestaff is a medium-power elemental staff released on 28 August 2007 as part of the God Wars Dungeon update. It requires 30 Magic to wield and provides an unlimited amount of water and fire runes. Steam battlestaves are dropped only by K'ril Tsutsaroth and his bodyguards, Balfrug Kreeyath, Tstanon Karlak, and Zakl'n Gritch.

Assuming the Seers' Village hard achievements have been completed, each steam battlestaff upgraded into a mystic steam staff would yield a profit of 32,948 coins.

The following spells require both water and fire runes: 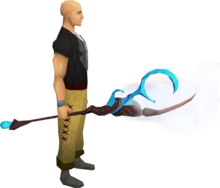