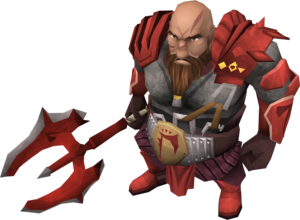 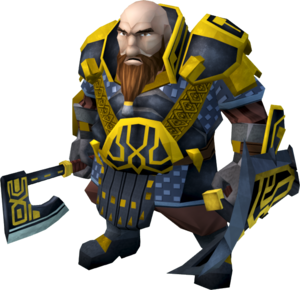 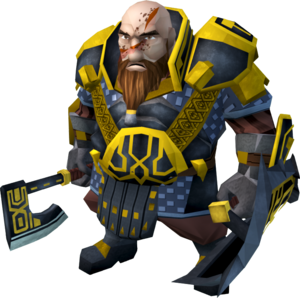 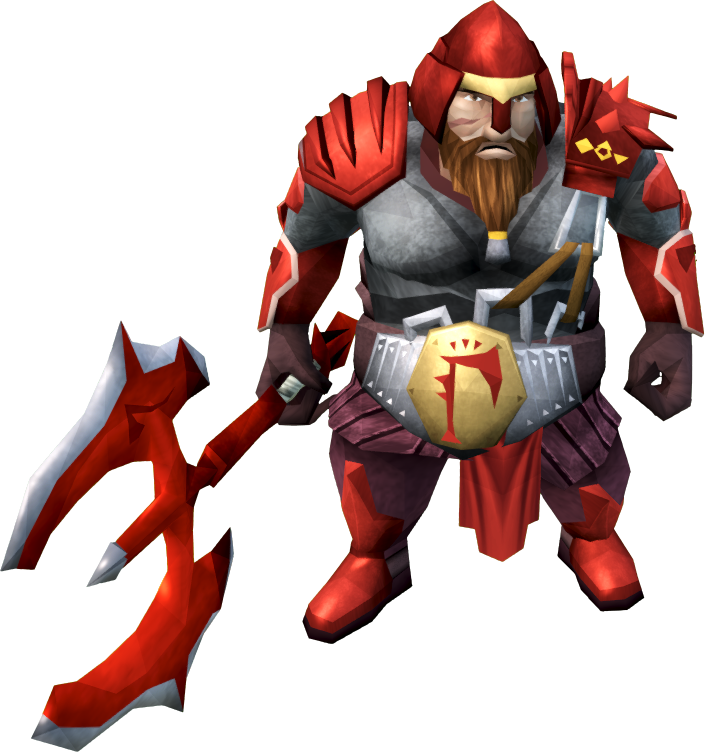 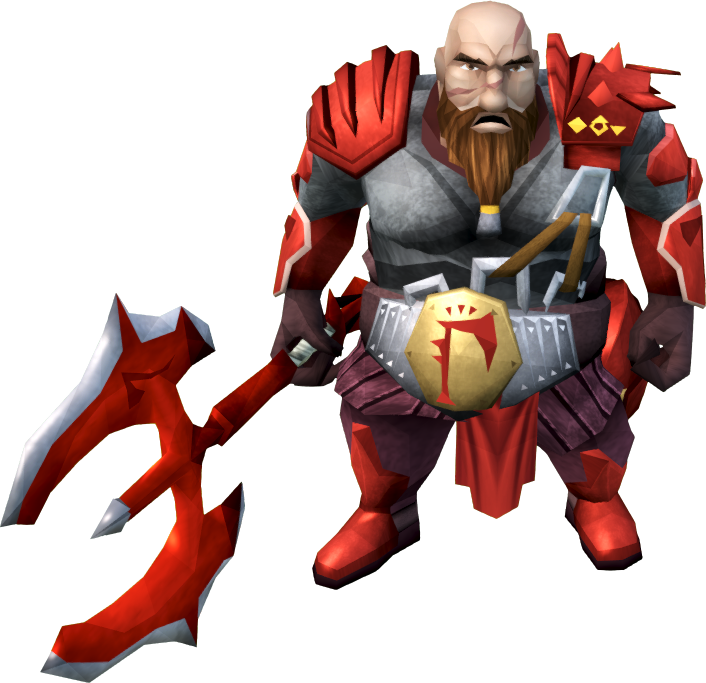 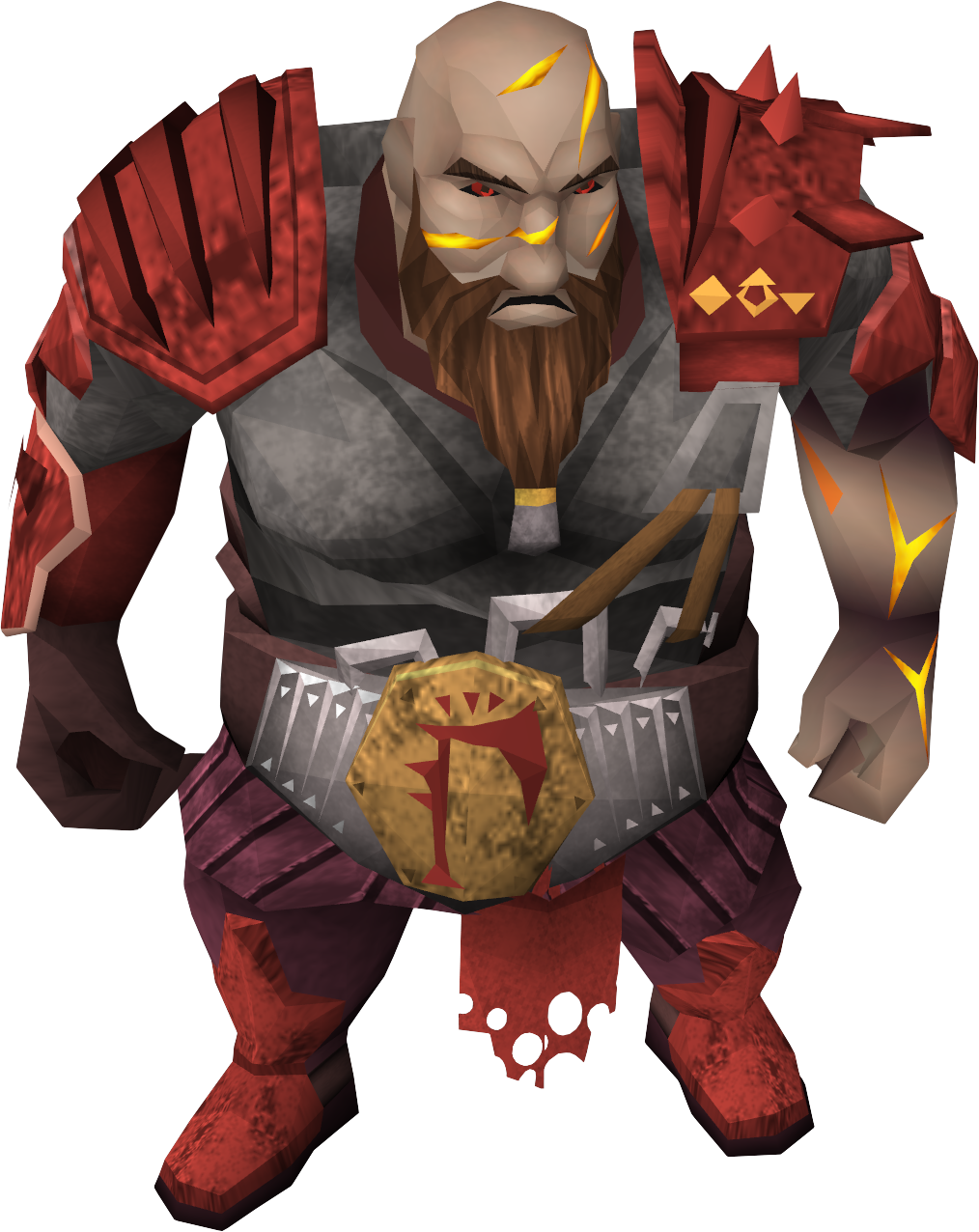 Colonel Grimsson is a member of The Red Axe Mining Company, and the secondary antagonist of the Red Axe series. He serves as the Red Axe director, Hreidmar's, right hand man and presumably the leader of the Red Axe's guards as well as an army at Barendir. During King of the Dwarves, Veldaban discovers that he does not voluntarily cooperate with the company, but was brainwashed to believe so.

Colonel Grimsson is fight-able as a class X2 boss monster in the Dominion Tower minigame alongside Hreidmar if the player has completed the quest Birthright of the Dwarves.

The Battle of Barendir[edit | edit source]

The Colonel was a well known dwarf for his efforts in fighting the trolls. He fought as the commanding officer in the Battle of Barendir, where the forces of Keldagrim attacked a large troll army. During the battle, Grimsson led the Black Guard into what was a massacre when he ordered them to charge into a troll entrenchment. Grimsson, once reaching the troll defence, began to furiously kill every troll around him, but suddenly he was struck in the skull by a large stone. Without warning, the Colonel went mad and began to attack everything around him, including his fellow dwarves. 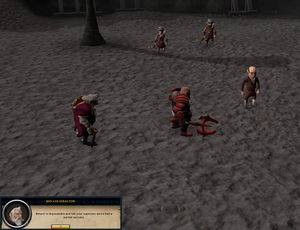 The Director and Grimmson meet with the Gnomes.

Veldaban, who was a lower rank at the time, ordered Grimsson to be restrained and taken into custody. Before he was put on trial, however, he went missing. He later joined the Red Axe where his madness and anger would be accepted as a strength. His most noticeable physical trait is the large scar on his face which he received at the battle. Colonel Grimsson almost mistook Grunsh, the ogre ally of the Red Axe, for a troll when they first discovered him.

Grimsson is seen along with Hreidmar, Grunsh, and some gnomes from Arposandra discussing the creation of the chaos dwarves and their current production status. When Grunsh spots the adventurer, he brainwashes them to fill their memories with kebabs and beer. To ensure that the adventurer wasn't faking, he trailed them to the Laughing Miner pub and confirmed that Grunsh's spell had worked.

During the Forgiveness of a Chaos Dwarf quest, the adventurer and Veldaban uncover another of the Red Axe's large hidden bases, only this one is far more important. It actually contains the machines needed to convert normal dwarves into Chaos Dwarves against their will. Grimsson is seen with Hreidmar and Grunsh as they oversee the conversion of the dwarves, but suddenly spot the adventurer and Veldaban when he has a flashback. While two try to escape from the facility, Grimsson gleefully reveals that the Chaos Dwarf killed earlier in the quest was in fact Veldaban's girlfriend, Hilda. After the realisation of this, Veldaban swears he will kill Grimsson.

Hreidmar, believing that the time was right to claim Keldagrim for his own, created an incident in the city's Lava Flow Mine. As expected, the Consortium prioritised the machines' repair over the workers, causing an uproar among populace of East Keldagrim. Hreidmar made his way to rally the crowds for his support, as he knew that he was the descendant of King Alvis after snooping around the royal records. As a precaution in the event that the Consortium denied his birthright, Hreidmar had Grimsson lead an army to camp in the Barendir tunnels on standby.

The army was spotted by the Black Guard. The adventurer and Veldaban met with Grimsson, who still taunted him over Hilda's death. Veldaban in turn teased Grimsson over his brainwashing, causing him to become angered and attacked the pair, but he was eventually defeated and retreated to his army. Seeing what Hreidmar was plotting, the adventurer managed to appeal to Pretty Flower, the troll warlord in the tunnels, by claiming that Grimsson had sent him a pretty flower. The warlord was incensed that Grimsson was making fun of him, and prepared his tribe for war against the chaos dwarf army. Grimsson and his army were no match against the ferocious trolls and were forced to withdraw.

After Hreidmar failed to gain control of Keldagrim, he realized that he was too old to rule and would have to step down after a meager two years of rule. He then decided to create his own palace and lava flow mine, abandoning all of their agents in the city. Grimsson remained with Hreidmar.

Veldaban, who had become paranoid of an imminent Red Axe attack, decided that they had to be dealt with once and for all. Rallying the Black Guard and Pretty Flower's tribe, they stormed Hreidmar's lava flow mine. Grimsson was waiting, having prepared defences in advance; despite his efforts, the adventurer and Veldaban were able to overrun them. Grimsson retreated, angered at Veldaban's pursuit, but Veldaban was too preoccupied in exterminating the Red Axe to even take note of Grimsson's cues. When Grunsh tried to modify Veldaban's memories, the adventurer, who had brought a modified wand to counter his spells, Grunsh was affected in the resulting blast. The adventurer restored his memories of the Battle of Barendir, much to his horror. As the adventurer dealt with Grunsh's memories, he fled with Hreidmar to the palace.

The pair confronted him and Hreidmar at the palace, where Grimsson had become suicidal and wished to die either to Veldaban or his arriving army. Despite his efforts to kill Veldaban, the adventurer killed him first. Hreidmar then used a spell with his dragon battlestaff to turn himself, Veldaban and the deceased Grimsson into chaos dwarves. The adventurer was able to deal with the duo, killing Grimsson for good.