From the RuneScape Wiki, the wiki for all things RuneScape
Jump to: navigation, search
The Old School RuneScape Wiki also has an article on: osrsw:Toktz-mej-tal
This article is about the weapon. For the quest item, see Obsidian staff.
Toktz-mej-tal? (edit)

TokTz-Mej-Tal (roughly translated as Obsidian staff) is a two-handed staff. It requires 60 Magic to wield. Players can buy the TokTz-Mej-Tal at the weapons store in the TzHaar city for 52,500 Tokkul. Its stats are the same as god staves, but tradeable and with a Prayer bonus.

Like all obsidian weapons, this staff cannot be made using the Crafting skill. 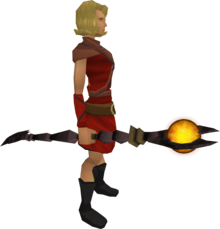