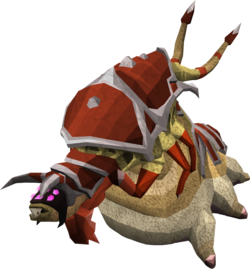 The Pest Queen is the final monster encountered in the quest The Void Stares Back, and is featured as the boss.

The Pest Queen is fightable along with Pest drones as a class A boss monster in the Dominion Tower minigame if the player has completed The Void Stares Back.

The music track Give it Your Pest Shot can be unlocked while fighting the Queen.

The Pest Queen is the leader of all pests. She decides what strategy pests use during one of their assaults, and she is summoned and controlled by the evil Wizard Grayzag. Due to her, pests always attack the same. E.g. ravagers are the front line and clear the battlefield, while leeches stay back and heal wounded pests. She is summoned by Grayzag through a portal in the Void. Usually, the Queen would be instantly defeated by Valluta, but she cannot fight due to being under the effect of "foodgoo". It is therefore up to the player to kill the Queen instead.