From the RuneScape Wiki, the wiki for all things RuneScape
Jump to: navigation, search
Xp book? (edit)

The xp book is a reward from the Dominion Tower. The book cannot be banked, either from the chest or directly at the bank chest. Upon using the book it claims, "You feel enriched by the knowledge!"

The amount of experience you receive is based on your level in the skill, and the Dominion Factor you had before you claimed it.

It can give experience in Attack, Strength, Defence, Constitution, Prayer, Ranged, and Magic. The chosen skill must be at least level 75 to use. 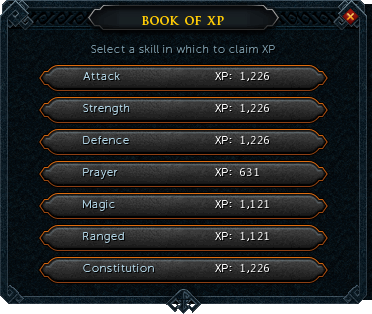