From the RuneScape Wiki, the wiki for all things RuneScape
Jump to: navigation, search
Nature staff? (edit)

The nature staff is a magic weapon bought from the rewards trader for 12,500 Dungeoneering tokens. Players can store up to 1000 nature runes in it, and remove them at any time. When wielded, there is a 1/10 chance that a nature rune is not spent when casting a spell that requires such runes. A Magic level and a Dungeoneering level of 53 is required to wield the staff. It does not stack in the bank even if it has the same rune count.

A player must be carrying nature runes for the staff's effect to activate, unlike a staff of air, the nature staff does not provide runes for spells.

When the staff's effect activates, the message reads: "Your staff magically pays for the cost of the nature rune." (This message is blocked if the Game tab is filtered.)

If you have nature runes in your inventory as well as in the equipped staff, you will use up the ones in the staff first.

Upon death the item is dropped and the number of nature rune charges remains constant. It won't be lost if picked up in under one minute. 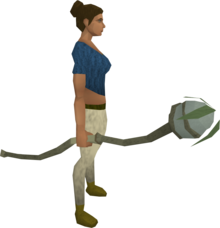 For example, using the nature staff and foregoing free fire runes for High Level Alchemy results in a difference of -719.8.