From the RuneScape Wiki, the wiki for all things RuneScape
Jump to: navigation, search
For this item's dyed variants, see blue, green, yellow.
For other variants of this item, see uncoloured.
Ancient staff? (edit)

The ancient staff is a two-handed staff that requires 50 Magic and the completion of Desert Treasure to be wielded. It can be recoloured into blue, green, and yellow or back to its original colour at a one time cost of 6,000 Loyalty points by using it on Xuan in Burthorpe/Varrock or Dilwyn in Prifddinas.

It has the symbol of Zaros at its head. Despite this, it does not give protection in the God Wars Dungeon.

An ancient staff is required in order to complete the Desert strykewyrm task in Desert task set. Once the elite set has been completed, the Ancient staff (red) can be upgraded to the Enhanced ancient staff (red) without losing its colours. The enhanced version has 1694 accuracy and +2 prayer. This is equivalent to a level 75 staff. 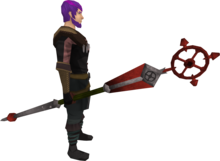