From the RuneScape Wiki, the wiki for all things RuneScape
Jump to: navigation, search
Not to be confused with Dragon staff.
Dragon battlestaff? (edit)

A dragon battlestaff is a dragon weapon that can be used after the Birthright of the Dwarves quest. It requires level 60 Magic to wield.

This item can be bought for 200,000 coins from Santiri's weapon shop on the west side of Keldagrim after finishing the quest.

It is worth noting that the Toktz-mej-tal has the same level and stats, plus a prayer bonus, all without any quest requirements. It is also significantly cheaper. 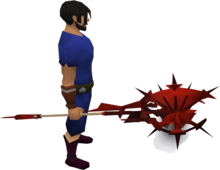