Sunfreet begins the fight by flying into the air. While Sunfreet is in the air, it shoots four waves of fireballs which deal extremely rapid typeless damage (1s and 2s in easy mode or 200s to 600s in hard mode). A single series of fireballs, if not evaded, is more than enough to kill any player. These fireballs cannot be blocked by an anti-dragon shield or antifire potions, and the attacks never miss. Players have to stand in an area where the fireballs will not land. To evade its fire rain attack, the player should first stay at the location they are when the battle begins, in the middle ring, then stay at the outer ring for two waves, then go to the centre of the arena.

The locations bombarded by Sunfreet's Fire Rain attack, and the best distances to stand from the centre for each wave. 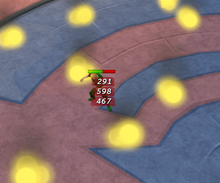 If players do not avoid the fire rain they will take frequent damage.

For the two outer ring waves, it is recommended to stay at the edge for the first wave, and stand closer to the middle for the next (but at least 3 squares from the cluster of fireballs). Begin moving to the new location as soon as the fires there start to dissipate, or the new incoming ones will hit you. Players will not have sufficient time to run to the centre if they stand at the very edge. Players should angle their screen to an eagle's eye view to better see where the fireballs are landing.

After the four waves of fireballs, Sunfreet lands and fights on the ground for some time. If the player happens to be standing where Sunfreet lands, they will be dealt a very high amount of unblockable damage. However, as players should be evading fireballs by staying at the centre and Sunfreet always lands on the edge, this is not much of a concern. 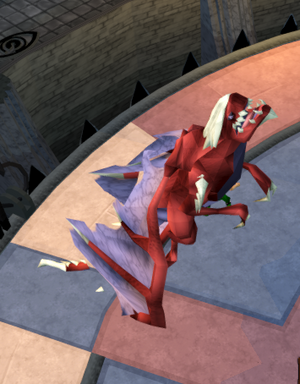 Eventually, Sunfreet will start flying again and send out another four waves of fireballs, after around 10 to 15 normal attacks. This cycle will repeat indefinitely until Sunfreet goes berserk (Once Sunfreet has been lowered to one-sixth of its original life points). The waves of fireballs will always have the same pattern. The amount of hits received depends on how many fireballs are close enough to damage the player.

Sunfreet is immune to the effects of rings of recoil, Vengeance, and Reflect, as well as poison.

In melee range, Sunfreet will only use melee. Otherwise, it will attack with magic. Sunfreet attacks with stab-based melee in a manner akin to a scorpion. It has a reach of two squares with its jabbing tail, same as a halberd.

Sunfreet's magic attack has a very long range of 20 squares. If the player goes out of Sunfreet's range, it will simply stand idle. Sunfreet is immobile when on the ground. The duration of the period in which it stays on ground depends on the number of attacks it launches against the player, rather than how long it has remained on the ground.

Sunfreet has a very high defence and no weakness; it is possible to use a full inventory of Scorpion meat without getting a single hit in if players do not use high level weapons. It is recommended to use level 80 and above weaponry for their high accuracy.

Once Sunfreet reaches 1/6 of its health, it will become berserk. It is activated by it shouting "Grraaaagh!". During this phase it will no longer perform its fire rain or its special attacks. It will hit faster and more accurately, so players must be wary of their life points during this part of the battle.

Since ultimate abilities are banned, the player must rely on threshold and basic abilities.

The most effective approach is to use a decent two-handed or dual wielded melee weapons and repeatedly use basic and threshold abilities. For basics; Cleave and Decimate are extremely useful, as is Sever for its damage-reduction potential. Fury and Dismember, meanwhile, are great damage over time abilities. Finally: Assault, Destroy, Quake, and Slaughter are your best choices for threshold abilities. Be wary of using channelled abilities as they may make it harder to avoid Sunfreet's special attacks.

You can also bring a shield for use of shield abilities like Resonance and Reflect. In conjunction with raw damage, the shield abilities are useful both for keeping you alive and conserving resources, such as food and potions. Anticipation can be used to lower Sunfreet's damage output by 10%. Resonance and Preparation are great for keeping you alive. Resonance will not heal you from the damage taken by standing where Sunfreet is about to land after the fire rain. If you get stunned by Sunfreet's roar, Freedom can instantly get you unbound. 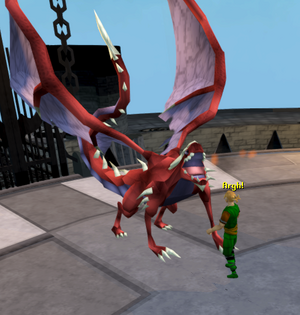 A player must face away from Sunfreet or they will be stunned.

Sunfreet has two special attacks that are both initiated when it crouches. Its first special attack is a roar that will stun the player for 6 seconds. This can be prevented with Anticipation. The second and more dangerous attack is when Sunfreet swings its tail to deal typeless damage equal to 90% of the player's current life points. You can tell which of these he's going to do by watching his tail when he lowers his head (crouches). If his tail is stationary while his head is lowered then he's going to roar. Conversely, if his tail is swinging from side-to-side then he is going to use his tailswipe ability. Resonance will not heal you if you are hit by Sunfreet's tail swing, although it will still negate the damage.

The swing of the tail can be avoided by moving at least 2 squares away. The roar is avoided by facing away from it. Sunfreet will also swing its tail when players range or mage it, in which case it does nothing. The roar also has an unknown range; if the player stands far enough (around 6 squares away), they will not be stunned even if facing Sunfreet, allowing players to continuously range/mage him. 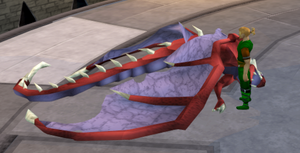 A player defeats the Sunfreet.

After killing the level 112 version of this boss, players will receive 4250 Dominion Factor, along with a visual upgrade to the dominion marker. 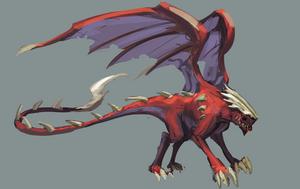