From the RuneScape Wiki, the wiki for all things RuneScape
Jump to navigation Jump to search
The Old School RuneScape Wiki also has an article on: osrsw:Sailing

Sailing is an often-discussed, non-existent skill. It was among the most popular points of speculation as to what the then-upcoming Dungeoneering skill would be, and subsequently became a running joke amongst the RuneScape community. It is commonly referenced by Jagex, and has featured in some of their April Fools jokes.

Shortly after the beta launch of RuneScape HD on 1 July 2008, an image was circulated that apparently showed a new skill in the Hiscores called "Sailing".[1] It was featured in a YouTube video that was uploaded on 4 July 2008, and included other "evidence" for the imminent release of Sailing.[2] This led to a flood of related posts on the RuneScape Forums and fansites with supposed evidence the community found.

A post by Mod Mark H on 3 July brought attention to the new RuneScape website header image, showing a man on a boat watching a dragon attacking an island. Due to the faint resemblance of a boat skill icon on the man's cape, similar to the one in the fake Hiscore picture, the image was widely spread as evidence for the skill.[3] This was debunked in a Q&A on 10 September 2009, when Mod Mark clarified that the speculation about the mage sailing a ship were false and denied that the upcoming skill was Sailing.[4]

Due to similar leaks related to the release of Summoning and chain of two skills a year in 2005 and 2006, it was expected that another skill would be released in 2008. However, Mod Dave posted on the forums on 11 July 2008 to say: "I can conform[sic] that image that has been going around the Internet was spoofed and there is no Sailing Skill." Via in-game chat, Mark Gerhard said "no it will not be sailing unless of course I get sacked first :)" However, he later stated he was joking.[5]

Other supposed evidence consisted of the 2008 release of pirate implings with the Rocking Out quest, the addition of an in-game world map, and the Digsite barge prior to its use to reach Fossil Island, also known as Anachronia. 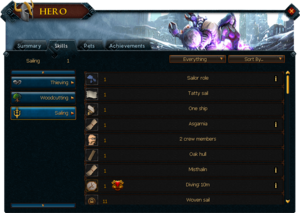 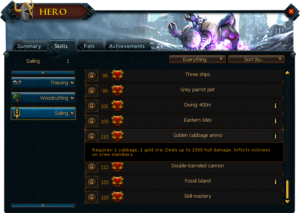 "Skill mastery" at level 120. The Golden Cabbage Ammo further suggests this skill is merely a joke.

After Dungeoneering was finally released, much of the speculation over Sailing died down, although it remained an in-joke among both the RuneScape community and Jagex, and many updates are jokingly speculated to be "Sailing" before they're actually released.

Since then, Jagex have referenced Sailing many times, including:

Sailing has on several occasions been up for debate on whether or not it should become a real skill. In 2015, Jagex opted for Invention over Sailing when deciding on the RuneScape's first elite skill. According to design proposed at the time, Sailing would've require at least two level 80 skills to unlock it in Construction, Fletching, Crafting, and Agility.[6]

Again in 2018, when Jagex were looking to release its 28th skill, Sailing was one of the alternatives to Archaeology and made it far enough in the planning process for Jagex to create a playable demo of the skill.[7] However, due to multiple flaws with its design, Archaeology was made instead.[8]