The Easter ring (labelled as Ring of Egg in the Costume room of a player-owned house) was a reward for the 2006 Easter event. From 10 April to 24 April bunnies buried Easter eggs (different from the 2002 and 2005 eggs) in the forest south of Varrock and near Falador. Players needed to find the mounds and dig up the eggs. When they found the blue magic egg with a bunny print on it and ate it, they would temporarily turn into a bunny. This gave the players the Rabbit hop emote. If they ate the egg over a hole, they would be able to enter the rabbits' warren, in the centre of which was a chute and a large pile of eggs. Players had to go up the chute and talk to the Easter bunny. After the player had given 10 eggs to the nearby children, the bunny would give them an Easter ring. When worn, this ring turns the wearer into a motley Easter egg. Similar to the Ring of Stone and Bone Brooch, the only actions a player may perform while being an egg are "Unmorphing" and talking. Poison damage and prayer drain are halted while morphed. If a player loses the ring, a new one may be obtained from Diango in Draynor Village for free. 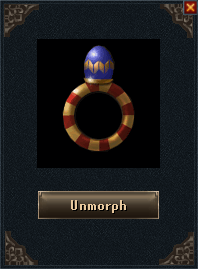 A player does not actually "wield" the ring when in morphed form. This has been confirmed via the Ring of Kinship. It cannot be taken into some minigames such as castle wars, which states that players cannot bring non-equippable items into the arena. The Easter Ring cannot be used during the middle of an emote - the text shown will be "You're a little busy showing off right now!" and the emote will continue. Known exceptions include the two emotes performed with the Zombie head; they can be interrupted.

This ring has been one of the most popular Holiday Rewards because it is very similar to the Ring of stone. Even today, it is possible to see some players playing with the Easter ring.

An update on 18 March 2013, made it so that using the Easter ring will always result in a blue egg with a yellow bunny silhouette . This is just one of several anti-gambling measures implemented on that date. However, as of a patch on 24 February 2014, the player using the Easter ring may now choose which Easter egg they would like to morph into.

A player morphing into one of the possible eggs.