A Gorilla greegree allows the player to turn into a gorilla while on Ape Atoll and in the Ardougne Zoo. While in this form, the player, using a rope, can pick red bananas needed in Recipe for Disaster. To make a gorilla greegree, the player must take monkey bones from a Monkey Guard and a Monkey Talisman to Zooknock.

Gorilla greegrees are made by taking a monkey talisman and the bearded gorilla bones of a level 88 bearded monkey guard to Zooknock.

The gorilla greegree is also used in the Do No Evil quest. 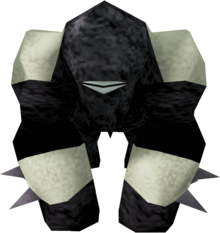 A player transforming into a gorilla using the gorilla monkey greegree (bearded).

The update history project is a work-in-progress – not all updates to this topic may be covered below. See here for how to help out!
Retrieved from ‘https://runescape.wiki/w/Gorilla_greegree_(bearded)?oldid=33929807’
Categories:
Hidden categories: