From the RuneScape Wiki, the wiki for all things RuneScape
Jump to navigation Jump to search
Item JSON: {"edible":"no","disassembly":"no","stackable":"no","stacksinbank":"yes","death":"always","name":"Ice amulet","bankable":"yes","gemw":false,"equipable":"yes","members":"no","id":"14599","release_date":"16 December 2008","restriction":"limited","release_update_post":"Christmas Event and Quest","lendable":"no","destroy":"'''During event:''' You can get another one from the snow imps near Lumbridge, Rimmington or Falador.<br/>'''After finishing event:''' You can get another from Diango in Draynor Village.","highalch":false,"weight":0.05,"lowalch":false,"tradeable":"no","examine":"A spiky amulet made of ice crystals. It has been enchanted so it will not melt.","noteable":"no"} 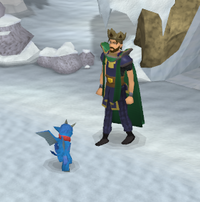 A snow imp being summoned in the Land of Snow

The ice amulet was a reward from the 2008 Christmas event or 2015 Christmas event. In 2008, players could acquire this item by speaking to the Head snow imp, while in 2015 it was given by the Snow imp. The amulet was used to call snow imps which were used to help a player locate Jack Frost in 2008, or rescue Jack Frost, Santa and the Queen of Snow in 2015. To summon an imp, a player must operate the amulet while wearing it. Outside of the events, it may only be used within the area of the Land of Snow from the Myths of the White Lands quest and inside Yeti Town.

The amulet does not work if the player has a pet or a Summoning familiar summoned, as the snow imp uses the follower slot. As with all untradeable holiday items, if the amulet is lost, a player can receive another one by talking to Diango in Draynor Village. The ice amulet can be stored in a toy box in the Costume Room of a player-owned house.

During the 15 Days of Christmas in 2013, this item, along with other Christmas-themed equipment, were given the Hybrid style of combat, and stats that scaled with the player's levels. This was so players could use these items in combat to assist in hunting for festive crackers during the event.