The Crafting Guild is located south-west of Falador and north of Rimmington. Level 40 Crafting is required to enter the guild.

There are several methods of reaching the Crafting Guild. A skills necklace or a modified artisan's bandana may be used to teleport directly to the guild, which is the fastest method of reaching it. The Clan vexillum can teleport the player to the Clan Camp, west of the guild. Any teleport to Rimmington, such as to the house portal, or the Port Sarim lodestone are also close by. Members may opt to use any balloon to land just right outside the guild.

When players enter the guild, they are greeted by the Master Crafter. If talked to, he will tell the players that "accomplished crafters come here to use our top notch workshops". He also sells the Crafting cape for 99,000 coins to members who have achieved level 99 Crafting. 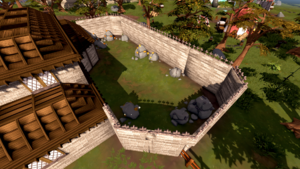 The mine found in the Crafting Guild

To the east of the guild is a fenced off open-cast mine that includes gold rocks, clay rocks, and silver rocks. A Shooting Star may occasionally land in the mine.

A fenced area west and south of the guild building contains cows. This area does not require players to have level 40 Crafting, meaning any player can fight the cows, gaining combat experience for killing cows and Prayer experience for burying their bones. 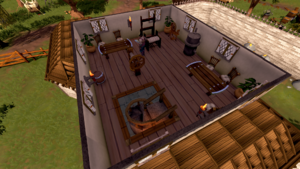 The 1st floor[UK]2nd floor[US] contains a Tanner who will tan players' hides, a loom for weaving, a spinning wheel for various items like wool or flax.

While the guild itself does not stock sheep, there is a handy flock wandering free immediately to the north, just outside the Makeover Mage's house. There is a bank chest nearby at the Clan camp.

The Crafting Guild is used to mine silver and gold for further processing into jewellery, is one of the best locations for crafting pottery (given the water source, wheel, oven and clay rocks), and is also used for leather-crafting given the nearby cow field, tanner and Rimmington's general store.

For free players, this is one of the best places to mine gold and silver ore. Players can bank fairly closely east of the guild at the chest located near the Clan Camp. Falador west mine also contains silver rocks, has no requirements and is only marginally further away from the Clan Camp bank chest. Dwarven Mine resource dungeon is significantly faster for mining gold rocks, but requires 15 Dungeoneering.

The mine is also one of the many places where shooting stars can land from the Shooting Star Distraction and Diversion.

Members can use the bank deposit box in the guild itself upon the completion of the Falador hard achievements.