The ancient gorilla greegree is made from a monkey skull, which can be looted from zombie implings. When wearing this greegree on Ape Atoll or some places in the Ardougne Zoo, the player will turn into a gorilla with a blue face. This greegree is the rarest because the required bone can only be obtained by looting zombie implings and their jars. This item has existed since Monkey Madness was released, but was not obtainable until zombie implings were released on 22 February 2010.

The chathead of the blue-faced ancient gorilla is that of an Elder Guard rather than one with a blue face. 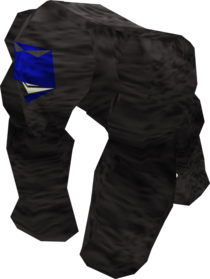 The update history project is a work-in-progress – not all updates to this topic may be covered below. See here for how to help out!
Retrieved from ‘https://runescape.wiki/w/Gorilla_greegree_(ancient)?oldid=33929806’
Categories:
Hidden categories: