The Wildstalker helmet is a helmet obtained from Mr Ex in Edgeville that keeps track of the kills that the wearer has achieved in player versus player combat in the Wilderness. A player's existing kills are not transferred to the helmet when it is first obtained.

A player transmogrified into a statue (tier 1)

The main feature of the helmet, as with the Duellist's cap, is the change of appearance that occurs with each total kill milestone reached (shown below as tiers). This helmet will also give the owner the ability to transmogrify into a statue, which lets other players view your various PvP stats that you have achieved, such as amount of total kills, death, and kill/death ratio. Upon reaching tier 2, it will also give access to an emote by selecting Brag while the helmet is worn.

If you reset the helmet, all kills and deaths will be reset as well as the tiers. 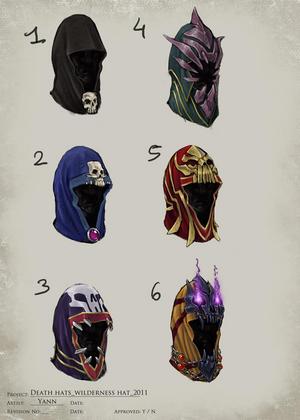 The concept art for all of the Wildstalker helmets