From the RuneScape Wiki, the wiki for all things RuneScape
Jump to: navigation, search
Snowboard (2016)? (edit)

The Snowboard (2016) is a seasonal item from the 2016 Christmas event. It could be obtained by pulling it out of the pile of snow north-east of Santa by the tent entrance.

When worn unsheathed, it can be right-clicked to perform two different tricks. 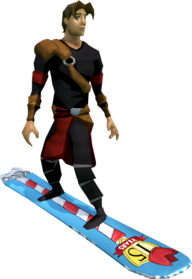 The update history project is a work-in-progress – not all updates to this topic may be covered below. See here for how to help out!
Retrieved from ‘https://runescape.wiki/w/Snowboard_(2016)?oldid=33936131’
Categories:
Hidden categories: