The Duellist's cap is a hat that keeps track of the amount of kills that the wearer has achieved in the Duel Arena. It has more detail for each milestone reached. As with the Wildstalker helmet, this cap will give the owner the ability to transmogrify into a statue, which shows various PvP statistics of the owner, such as kills, deaths, and current kills in a row. It will also give access to the emote by selecting Brag when the hat is worn.

The hat can turn a player into a statue with any hat other than the tier one. This hat is obtainable by speaking to Estocada, the man brandishing a fine sword at the gates of the Duel Arena. The kills are tracked in both F2P and P2P worlds.

The cap can (but doesn't have to) change look after a certain number of wins. Once you can, right click the cap and click "change-look". 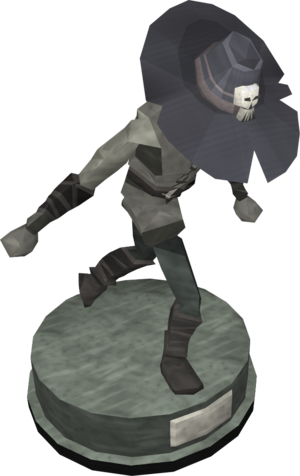 Transmogrified into a statue.

Your Duellist's cap has been updated!

A player transmogrifying into a statue.
Retrieved from ‘https://runescape.wiki/w/Duellist%27s_cap?oldid=35440521’
Categories:
Hidden categories: