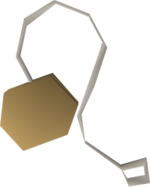 Yo-yos are discontinued holiday items which were made available during the 2004 Christmas event from 21 December 2004 for about two weeks. The yo-yo can be right-clicked to perform tricks, such as "walk", "loop", and "crazy". If a player loses their yo-yo, they may go to Diango in Draynor Village and ask for another.

During the 2004 Christmas event, Father Christmas was found in several cities including Varrock, Falador, Ardougne, Catherby, and Yanille. When players talked to him and asked for a present, he would give a yo-yo. Santa only gave one to each player.

On the first day of release, when a player died in the Wilderness, there was a chance the yo-yo would not return to Diango and it would be lost forever. As a result of time, yo-yos are rarely seen nowadays. Yo-yos are one of the rarest discontinued items in Runescape.

At some point in time in the last couple of years, the "Play" option on the yo-yo has received an animation update. Over time this has gradually also grown to include the other options as well.

A player plays with a yo-yo