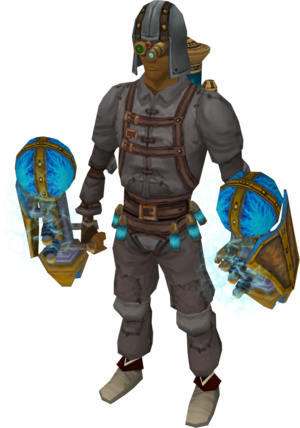 Ghost hunter equipment is an experience-boosting set of hybrid armour that could be obtained from the 2014 Hallowe'en event, or as a possible very rare drop from ghosts and ghostlike creatures, such as mighty banshees, aberrant spectres, revenants, spiritual warriors, tortured souls and the Barrows Brothers.

It automatically adjusts to the highest-level tier the player can equip when worn, up to a maximum of level 50 for free players and level 70 for members. When a piece of equipment is equipped for the first time, it is accompanied by the message: The armour adapts to suit your current abilities.

During the 2014 event, it could be bought from Death as individual pieces. The full set cost 19,000 reward points.

This armour can be stored in the armour case of the POH when all four pieces are set to the same level.

If any piece is lost in the Wilderness or destroyed, the player will have to reobtain it by killing ghosts.

Ghost hunter equipment increases experience earned and damage dealt against any creature that gives Prayer experience through an ectoplasmator. However, it does not work for creatures that are triggered via attuned ectoplasmator only, such as abyssal demons. This increase is 3% with one piece, 6% with two pieces, and 10% with three or more pieces of the set. Using the ectoplasmator is not mandatory for the set effect to occur. Below is a list of monsters that are affected by this set effect.