From the RuneScape Wiki, the wiki for all things RuneScape
Jump to navigation Jump to search
The Old School RuneScape Wiki also has an article on: osrsw:Reindeer hat
Not to be confused with Oxfam reindeer antlers or Antlers.
Item JSON: {"edible":"no","disassembly":"no","stackable":"no","stacksinbank":"yes","death":"always","name":"Reindeer hat","bankable":"yes","gemw":false,"equipable":"yes","members":"no","id":"10507","release_date":"18 December 2006","restriction":"limited","release_update_post":"Christmas Update!","lendable":"no","destroy":"You got this hat from [[Shanty Claws]]; you can get another from Diango.","highalch":1,"weight":2,"tradeable":"no","examine":"A reindeer hat and a matching flashing nose.","noteable":"no"} 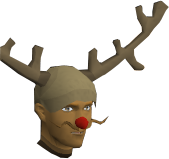 The reindeer hat is a discontinued Holiday reward which was one of two rewards for completing the 2006 Christmas event. The hat has no bonuses and is untradeable. If lost or destroyed, it is re-obtainable from Diango in Draynor Village or Ianto in Prifddinas. An emote is performed by using the "Emote" option on the hat while it is worn, along with a message in the chat-box: You act like a reindeer. It can be stored in the toy box in the Costume room in a player-owned house.

A player operating the Reindeer hat.

During the 15 Days of Christmas in 2013, this item, along with other Christmas-themed equipment, were given the Hybrid style of combat and stats that scaled with the player's levels. This was so players could use these items in combat to assist in hunting for festive crackers during the event.

This information has been compiled as part of the update history project. Some updates may not be included - see here for how to help out!
Retrieved from ‘https://runescape.wiki/w/Reindeer_hat?oldid=35627074’
Categories:
Hidden categories: