The scythe is a holiday item from the 2003 Hallowe'en event. They were dropped on 31 October 2003 and 2 November 2003. There was also a server message saying "Happy Halloween." The second drop happened because many players in North America were not online when Jagex dropped the scythes, causing them to miss out and write to Customer Support.

When they were dropped, only one could be obtained. If a player attempted to pick up another scythe, their message box would show the message: "You already have a scythe, you don't need another one."

Scythes are wieldable as a two-handed weapon. If the scythe is lost, it can be retrieved from Thessalia's Fine Clothes in Varrock or Diango in Draynor Village.

The scythe is more or less a novelty item like all other holiday items, although it can be used as a weapon. The scythe is a great reminder of the days of RuneScape Classic, and it is very rare to see someone still in possession of a scythe.

In RuneScape Classic, it is also possible to take them to Entrana, this made the Lost City quest noticeably easier; however, this is no longer possible in future versions. Also, in RuneScape Classic, there is an occasional animation of the scythe "drawing blood" from the opponent, showing a small splashed red dot in addition to the regular damage message. This animation has no effects on the actual damage, however.

The Holiday Event in which scythes were dropped was the result of a poll ran shortly before the event. The poll asked players whether they would rather have no Holiday drop for Hallowe'en and have a pancake day in two months, or delay RuneScape 2 a day or two as a result of the production of a Hallowe'en drop. As it can be seen, more people ultimately supported the inclusion of a holiday drop.

It also led to the discovery of the partyhat duplication glitch. 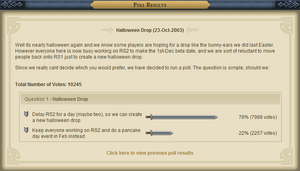 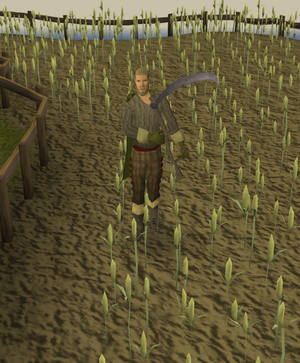