From the RuneScape Wiki, the wiki for all things RuneScape
Jump to: navigation, search
The Old School RuneScape Wiki also has an article on: osrsw:Candy cane
Candy cane? (edit)

The candy cane was a reward from the 2009 Christmas event A Christmas Warble. Players can wield the candy cane in one hand, giving them some small stat bonuses. The spin emote can be performed by wielding the candy cane, right clicking it, and selecting 'spin' on the equipment screen.

If you lose your candy cane, you can get another from Diango in Draynor Village. Like all holiday items, the candy cane can be stored in a toy box of a player's player-owned house.

It has similar stats to a bronze mace, except it has lower accuracy and no Prayer bonus. Despite this, very few players that have been around long enough to have earned it are still in need of such a weak weapon. This weapon is not permitted on Entrana due to having combat stats. 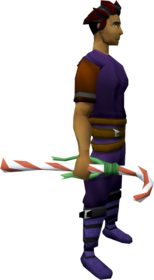 A player spinning a scythe using a popular glitch.

Upon the release of the 2009 Christmas event, it was discovered that if a player spun his or her candy cane and then quickly switched to another weapon, the other weapon would spin in the air instead. In response to comments from players, Mod Edam has confirmed that it was an unintended glitch in the game. Many players found the glitch amusing and requested that Jagex leave the glitch intact; however, Mod Edam said that the glitch would be fixed anyway, as it could have potentially created other graphical errors.[1] The glitch was removed on 11 January 2010, the same day as the end of the Christmas event.[2]