A ring of stone is a ring obtainable as a drop from TzHaar and TokHaar. When worn, the ring transforms the player into a lump of rock. The wearer may chat while transformed, but any attempt to move will automatically unmorph the player. The player will also be automatically unmorphed if attacked by an NPC or another player. Similar to the Easter ring, the ring of stone cannot actually be seen equipped in the ring slot as the worn inventory interface will be unavailable, and a window with a single "Unmorph" button will replace it. When transformed by the ring of stone, the player's white dot will still be visible on the minimap, and if right-clicked by another player all normal options are still available. It does, however, pause the poison effect for as long as the player is morphed.

A ring of stone recolour is available from the third batch of Members Loyalty Programme rewards that was released in December 2011. When recoloured, it not only changes the appearance of the ring itself, but also allows players to change into different coloured rocks.

The ring of stone is not dropped by monsters in the TzekHaar Front.[1]

The ring does not function inside of the Wilderness. 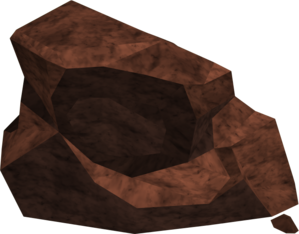 A player morphed into a rock

During the quest King's Ransom, the player can use the ring on the statue of King Arthur, instead of the animate rock scroll supplied during the quest to revert him back to life.

It can also be used with a ring of visibility while under some special conditions to spawn TzHaar-Ga'al-Kot after completing The Brink of Extinction.

A recoloured ring has a recoloured rock when the ring is worn. Besides the colour, the kind of rock also changes. For example, the original looks like a brown mining rock, while yellow looks like a sulphur rock and red/green look more like crystals.

To change ring colours the player must use the ring on Xuan and then select the desired colour. When recoloured, the ring is untradeable. The player must change the colour to Original to trade the ring. 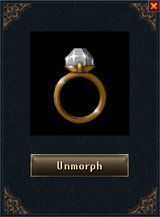 Only one option is available to the player while morphed.