Carnillean Rising is a quest developed by Mod Ash that was released on 3 July 2012. It is the sequel to Hazeel Cult.

Talk to Xenia outside the Carnillean Mansion just south of Ardougne Castle. She will then tell you to speak to Ceril Carnillean in his mansion about a task he has for you. She was recruited herself earlier, but refused. If you sided with the Carnilleans during Hazeel Cult, the Carnilleans will gladly accept you, but if you sided with the cultists, Xenia will reveal that she has used trickery and deceit for Ceril to trust you. Regardless of the option you took in the previous quest, locate Ceril in his room in the western part of the ground floor[UK]1st floor[US] of the mansion and ask about the job.

He will say that Henryeta and he are growing older and need an heir, but their son Philipe is rather snobbish and not much of an adventurer. Hence you are needed to create a quest for him to complete, using only materials from the house. The quest is to be set in the Carnillean Sewers under the mansion. He will hand you a list containing a number of tasks to do. Do not forget to ask where you can get the stuff from, otherwise you will not be able to continue. After you have spoken to Ceril you need to talk to Butler Crichton, Butler Jones's replacement, who will tell you to search a bookcase for a book about the Carnillean family. It is located in the room with Henryeta Carnillean. Then go into the basement, and into the cave near the ladder.

In the caves[edit | edit source] 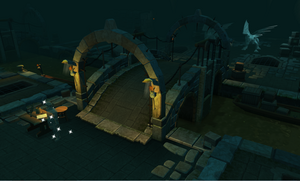 The set for your quest.

Upon entering the cave system a cutscene will play. Butler Crichton will explain to the player what to do. Inside the tunnels, you will see various things that can be built. Right-clicking them will show what items are needed for them to be constructed. Now head back to the house to gather some resources.

In the master bedroom: 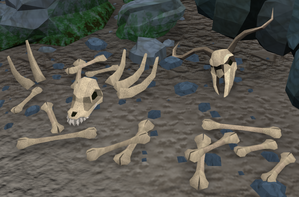 Animal skulls and bone scraps for the pit and decorations are taken from the Spoil Heap pile in the western corner of the small cavern located southeast of the goblins where the Juvenile Wolves are found.

All of the hotspots will periodically sparkle, which will help you identify them as you proceed through the quest. Asking Butler Crichton about the list will let you know exactly what you need to finish as he will also go in details about how to finish the task.

To leave the cave, right click on the Butler and select "exit".

Creep through ancient cobwebs into a sinister cave[edit | edit source]

The entrance hotspot in the cellar (cobwebs around the entrance of the cave) requires: 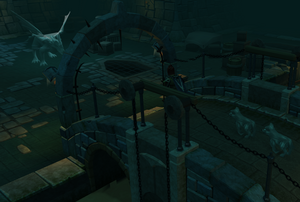 Luring the little cubs to their doom

You have two options for the pit:

Talk to the two goblins Nostrillia and Slimepits. Nostrillia will only agree to help you if you give her human armour. Offer the armour taken from the wardrobe and ask them to play the role of the guards. After a long dialogue they will walk to the guard hotspots. They do not have to be built there.

After the goblins have been set up as guards, you can build tripwires in the nearby hotspots. You will need twine to do this.

You may want to construct the trip wire as the last thing you do, as it is quite tedious to cross each time. Build the trip wire only after the dragons, the damsel, and the jailer are all built.

Go to the cellar and ask the chef Claus for help. Tell him that he is to be the "drunken jailer" and he agrees but only if he gets to drink Ceril's fortified wine. You should have taken it already, if not it's in the cupboard near the oven. Lead him to the part in the cave before the bridge over the water and "build" him in the "Jailer" hotspot.

Enter the cave in the southeast part of the dungeon to find two Juvenile wolves hunting a cave mouse. Grabbing the mouse will cause the wolves to follow you closely. Lead them to the dragon hotspot and build it to position them. The dragon hotspot is across the bridge from Claus. Use a dragon head on each wolf to finish. 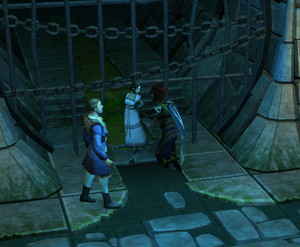 Speak to Sarsaparilla and ask her to help. When she refuses, ask if she is going to stay up there all day. She then reveals she always wanted to be an actress after watching a performance. Tell her that you're making a play and you want her in it, and you'll be given the option to give her a role. The role that she should be given to her is the fourth one, a "Damsel in distress". Take her to the room with the Dragon Guards, and "build" her in the Damsel in Distress hotspot. Use the twine on her to tie her up.

You must make a choice for Philipe's "reward" for doing the quest using one of the two items (doesn't matter which):

The decoration hotspots give you three choices: blood stains (red paint), scary eyes (red paint and wooden boards), or impaled skulls (animal skulls and spikes). It doesn't matter what you choose, but one of each will impress Philipe. He will not be impressed by repeated decoration.

There are three hotspots to decorate: 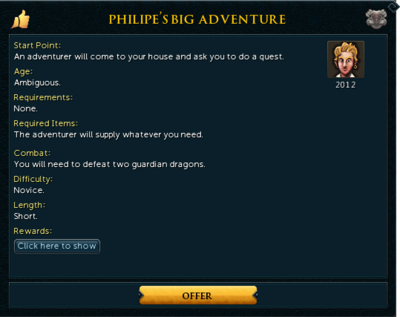 Once you have the scenario completed, talk to Philipe and offer the quest, he will tell you that he overheard his parents and he knows the plot, thus not being very cooperative with you. Pickpocket him and you will get his bag of sweets, now offer the quest again selecting the reward as the bag of sweets, he will reluctantly agree to do it.

To complete the quest, Philipe will need:

A funny moment occurs while Philipe tries to sneak past the guards; after he gives up, talk to Slimepits. As soon as Butler Crichton narrates, wait for a few moments. Do not go forward with the dialogue or Philipe will not be able to bypass the guards. 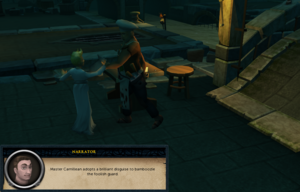 Disguising as a humble maid and getting the jailer drunk

Once Philipe slays the "dragons", the Cave Wolf Matriarch will appear. Philipe will tell you to distract the matriarch so that he can kill it. To do this, simply click once to attack it, and it will immediately shift its attention towards you. Philipe cannot die during the quest, and appears to take no damage from the wolf's magical attacks.

The wolf has two attacks, both of which are dodged by running constantly. The first is an area-based magic orb that hits in the 200s to low 300s. The second is a howl attack that is harder to avoid, which causes stalactites to fall from the ceiling in a large grid, dealing rapid damage of around 50 to 100 (may be higher 500-600). As your health becomes lower, the amount of damage from the wolves attacks will lessen; therefore, the chances of death are very low, so no more than one or two pieces of food will be needed, if any at all. Philipe will "level up" during the fight with the wolf causing greater and greater damage.

A good technique is to lure the wolf to the bridge on the opposite side of the "Damsel in Distress" and trap it there. If the player stands back far enough on the bridge, the wolf will be unable to attack. The wolf will occasionally direct its attention to Philipe, but simply clicking the wolf will bring its attention back to you (even if you're standing a few steps away). Another technique would be to run circles around the wolf until Philipe kills it, as the magic orb won't do damage if you are out of its Area of Effect, and most if not all of the stalactites will miss you.

Once Philipe has defeated the wolf, talk to him and you will be shown a short cutscene of his rescue of Sarsaparilla. Following this scene, you will be teleported back to the main floor to where your character will be rewarding Philipe for the completion of his first quest. 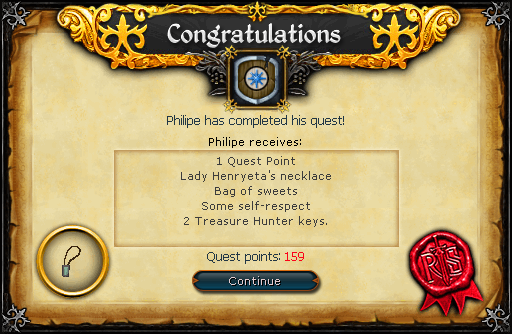 Speak with Philipe and a cutscene follows where Ceril hears how the quest went. While speaking to Ceril, Xenia will teleport back to the entry place of the mansion. Speak to Xenia once more and she will reveal that she was the one that planned the entire wolf attack. Amusingly, your character will be very frustrated when learning of this. Speak to Ceril one last time to finish the quest and to receive your reward. Quest complete! 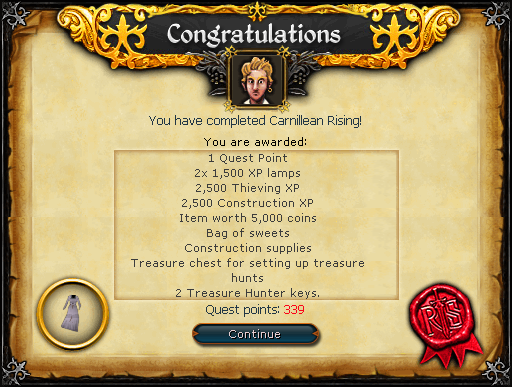