From the RuneScape Wiki, the wiki for all things RuneScape
Jump to navigation Jump to search
This article is about the quest. For item with same name, see Gunnar's ground (item).
For the achievement, see Gunnar's Ground (achievement).
"Gunnars" redirects here. For the ferryman to Jatizso, see Mord Gunnars. For the ferrywoman to Neitiznot, see Maria Gunnars.

Gunnar's Ground is a quest available to both free players and members. The quest replaced Romeo & Juliet. Players who have completed the Romeo and Juliet quest are still able to complete Gunnar's Ground and attain the extra rewards, but they will not receive additional quest points. The quest is about a dwarf poet that falls in love with a Barbarian chieftain's daughter but the chieftain doesn't trust outsiders. Players must find a way to let the daughter fall in love with the dwarf, and get the chieftain to accept outsiders.

A smitten dwarf sits lone, forlorn;
His love full-formed but lost.
Will you help to guide his path and
Uncross a love star-crossed?

Getting the ring[edit | edit source] 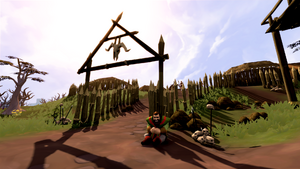 Start the quest by talking to Dororan. He's the dwarf sitting alone beside the wooden fence east of Barbarian Village (near the fishing spot and the bridge). He starts the conversation with a poem and tells you that he's madly in love with a barbarian girl named Gudrun and wishes to give her a present. He wants you to get a gold ring for him from Jeffery in Edgeville (a normal gold ring will not work). He will give you a scroll containing a love poem in exchange for the ring.

Go north to Edgeville and look for Jeffery who's standing near the furnace. Members can teleport to Edgeville with an Amulet of glory or using the Paddewwa Teleport spell from the Ancient Magicks spell book. Free players can craft a nearby canoe. If you have the Edgeville lodestone activated, you can also use this to get to Edgeville. Or you can simply walk north into Edgeville from Barbarian Village.

Talk to Jeffery and trade the scroll containing the love poem for a gold ring. Bring the gold ring back to Dororan.

Dororan will ask you to engrave the ring with a text "Gudrun the fair, Gudrun the fiery". Click on the ring to engrave it, and show the Dororan's engraved ring to Dororan. He'll like it and will want you to give it to the barbarian girl Gudrun. 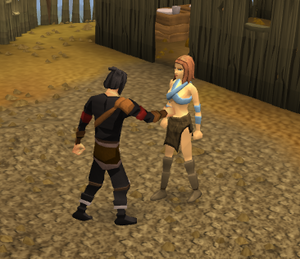 Showing the ring to Gudrun.

Find the barbarian girl Gudrun. She's located south-west of the mine in the village (just a few steps away from Dororan). Speak to her and give her the ring. She will think that you are giving it to her so tell her that someone else sent you. She will ask who it is. Tell her it's from a secret admirer. Do not tell her that Dororan is a dwarf. She will then say that her father, Gunthor, the village chieftain, will not allow her to have a relationship with an outsider.


Look for Chieftain Gunthor in the longhall north of the village and talk to him. He will not allow his daughter to have a relationship with an outsider and will say something about Gunnar, the founder of Gunnarsgrunn.

Return to Gudrun and she will suggest that you ask her "secret admirer" (Dororan) if he has any ideas.

Go back and speak with Dororan and he will decide to write a poem to Gunthor, praising Gunnar to gain his favour. He will get stuck and will ask you for some help. The poem is a small trial-and-error game, in which Dororan hints for the correct words. The first choices you'll receive are all incorrect. After choosing one, you will be prompted with other different words. This happens for all 3 parts that Dororan needs help on.

The correct answers are as follows:

Here is how the poem goes:

Our people dwelt on mountains steeped in lore,
A mighty tribe as harsh as any beast
Who then, in face of madness, swept to war,
The warlord Gunnar leading to the east.
This legacy of honour still lives on
In Gunnar’s bloodline, fierce to this day.
We sing the tales of battles long since won
And from his righteous purpose never stray.
But long is gone the author of that threat
And even rolling boulders come to rest,
For Gunnar’s ground is rich and fruitful yet
And Gunnar’s blood with beauty also blessed.
Now let these freemen from this conflict cease
And let this be the time of Gunthor’s peace.

Dororan will then give you the completed poem, Gunnar's Ground. Go to Gudrun and ask her to read it to her father. A cutscene will start and Dororan will have second thoughts. Tell him to be positive and keep encouraging him.

Gunthor will accept the idea that Gunnar's war is over and that the barbarians should consider themselves settled in the village. Another cutscene will show Gudrun finally meeting Dororan and hugging him. Talk to Dororan to complete the quest. 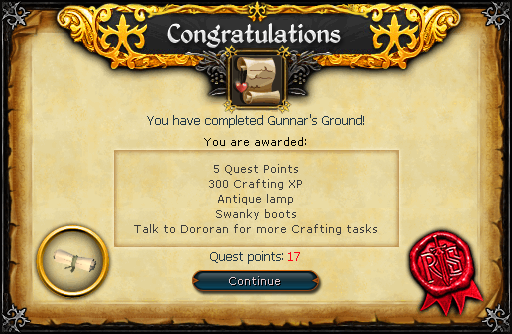 After the quest, you can go to what used to be Juliet's house (near the Cooking Guild) and Dororan is now living there with Gudrun. You can talk to Dororan and ask for additional tasks to engrave jewellery for him and receive up to 32K experience in Crafting.

If you talk to Dororan after this quest, he will ask your help in carving words on a ruby bracelet (engrave 'With beauty blessed.' on it), dragonstone necklace (engrave 'Gudrun' on it) and onyx amulet (engrave 'The most beautiful girl in the room.' on it). If you agree to help, you get an additional total of 32,000

experience. Free players can engrave the jewellery even though they can only be obtained by members. Temporary boosts work.

Gunnar's Ground is not currently required for any quests or miniquests. 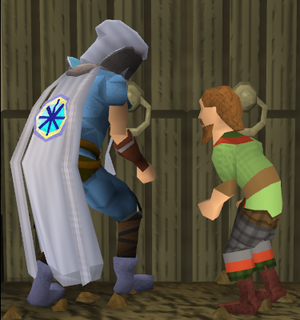 A player wearing the quest point cape during one of the cutscenes in Gunnar's Ground
Retrieved from ‘https://runescape.wiki/w/Gunnar%27s_Ground?oldid=35786081’
Categories:
Hidden categories: