From the RuneScape Wiki, the wiki for all things RuneScape
Jump to: navigation, search
Necromancer kit? (edit)

The Necromancer kit is a rare item that is obtained from the gold chests (in Shade Catacombs) in the Shades of Mort'ton minigame opened with Gold keys. Together with 10 fine cloth it can be used to change one piece of the Dagon'hai robes set into the corresponding piece of the Necromancer robes, which requires level 85 Crafting (this is assistable) and grants 250 crafting experience. This gives additional prayer bonus to the robes, as well as changing their look. 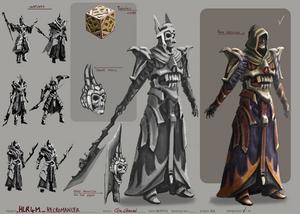