From the RuneScape Wiki, the wiki for all things RuneScape
Jump to: navigation, search
This article is about in-game WildyWyrms. For how they appeared in 2011, see WildyWyrm (historical). 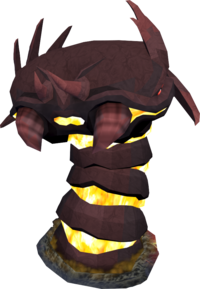 The WildyWyrm is a boss variant of regular lava strykewyrms, requiring 94 Slayer in order to be harmed. They have a rare chance to spawn next to their lesser counterparts, and will then start roaming throughout the Wilderness in mound form, although they are limited to a somewhat confined area - they are generally found in relative proximity with their lesser counterparts. They will rarely travel away from the Lava Maze, although they are restricted from travelling any further than the bandit camp to the south, and the herb patch to the east.

If it spawns, a world announcement is made:

News: The WildyWyrm has just spawned in the wilderness! The WildyWyrm can also be summoned and controlled by Jagex Moderators, and they are capable of choosing their attack style and increasing their attack and defence levels. They can additionally heal the WildyWyrms in order to prolong the fight and create a greater challenge for the players involved, although such occurrences are extremely rare.

Like all strykewyrms, the WildyWyrm appears in mound form, but is labeled as a "large" mound. Unlike the other strykewyrm mounds, interacting with the WildyWyrm's mound will cause a prompt to appear, asking the player if they are ready to fight. If the player accepts the prompt, then the WildyWyrm will burst out of the mound and begin combat.

Like their lesser cousins, WildyWyrms use all three forms of combat. However, their ranged attacks shatter on all players within range of the projectile when it lands, while the magic attack bounces to a nearby player if they are in range. The "stomp" attack inflicted by WildyWyrms will also drain a single Attack, Strength, Magic and Ranged level for every stomp hit inflicted. They exclusively use their lesser cousins' burrow attack, even if the player is not within range to be dragged. Unlike other strykewyrms who will burrow back to the ground and despawn if it cannot see the player or they run too far from it, WildyWyrms are continually hostile and will not despawn, meaning the only way to remove one from an undesired area is by killing it, although a game update will also remove it if it is not killed by then.

With completion of the easy Wilderness Tasks, the player will be awarded a Wilderness sword 1, which (alongside its higher variants) can be used to track the WildyWyrm. If a WildyWyrm is present in the Wilderness, the sword can precisely track down the WildyWyrm (compared to the hellfire bow, which only lists a general location); however, unless it has been provoked, then the sword will continually update the WildyWyrm's location.

A deathtouched dart can be used to instantly kill a WildyWyrm, ignoring the level 94 Slayer requirement. Ironman accounts (who are otherwise unable to harm the WildyWyrm) may also kill it instantly with a deathtouched dart. Ironmen will only receive the 100% drops however; the main drop is not rolled.

As WildyWyrms can be found anywhere in the areas they can reach, caution is highly advised as they are almost always found above level 30 Wilderness, and some of these locations also double as multi-way combat areas. They are best tackled in a group, as killing one alone can be very tedious and time consuming due to their extremely damaging magic attacks, high defence, low affinity value and the ability to quickly restore drained stats.

Drops are obtained as long as the person contributed towards its death. The WildyWyrm has 8 times the chance of dropping a unique attachment than killing a lava strykewyrm (while not on a slayer task), but it is limited to only one drop per kill regardless of how many people damaged it when it died.[1]