From the RuneScape Wiki, the wiki for all things RuneScape
Jump to: navigation, search
The Old School RuneScape Wiki also has an article on: osrsw:Avatar of Destruction

The Avatar of Destruction is one of the two avatars in the Soul Wars minigame that were created by Nomad. It is powerful enough to be considered a tier 7 god.[1] The avatar, like the Avatar of Creation, can drain the player's Prayer.

This avatar can be found on the red team's side of the battlefield. The required Slayer level needed to begin attacking this beast starts at 100 (meaning that no one can attack him as Slayer capes, Slayer's respite, and wild pies are not allowed to be brought into the minigame), but as players add Soul fragments to the Soul obelisk, the avatar's power will gradually diminish and this Slayer requirement can eventually be reduced to 0.

When members of the red team bury the bones of their fallen comrades or slaughtered enemies in captured graveyards, they will have a chance of increasing their avatar's Slayer Level. 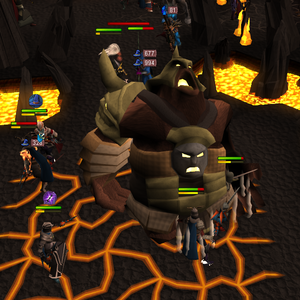 The battle for the Avatar of Destruction has ended.