From the RuneScape Wiki, the wiki for all things RuneScape
Jump to navigation Jump to search
This article is about the boss monster. For other uses, see Vorago (disambiguation).

Vorago is a gigantic, rocky, and extremely powerful boss monster created by the Anima Mundi, or as he refers to it, the "earth soul".[1] On release Vorago was billed as the toughest group boss monster in RuneScape, but has since been surpassed by other bosses such as Yakamaru, Nex: Angel of Death, and Solak.

Using the maul of omens to finish off Vorago is a requirement for trimming the completionist cape.

Obtaining all unique drops will unlock the [Name] of Omens title.

Vorago is an ancient anima being who used to cause trouble in the past. Eventually, he was defeated by a weapon known as the maul of omens, and went into a restorative sleep sometime before the Third Age, given the fact that he did not interfere when the Anima Mundi was greatly harmed when Zamorak destroyed Forinthry. He "destroyed" the weapon, shattering it into three fragments which he embedded in his body.

He later woke up around the beginning of the Sixth Age, following Guthix's death by the Mahjarrat Sliske. It is likely he awoke due to the Anima Mundi's mourning of Guthix. Though still just as powerful as he was thousands of years ago, Vorago became much more friendly and encountered curious adventurers who attempted to explore the caverns he was in. Some of these adventurers were eager for a fight, and Vorago allowed them to challenge him, because it would give him practice in the event that a god attempt to endanger Gielinor. He appeared to be quite happy if a god wished to challenge him with good intentions, stating that it would be a worthy battle.

As the gods returned, a massive battle took place outside of the Borehole. For reasons unknown, Vorago decided not to intervene, which he would deeply regret. Sometime after this battle, the boar goddess Tuska sensed Gielinor due to Guthix's Edicts shattering, and made her way to the planet to consume its anima. Tuska was detected by Wizard Chambers, prompting Saradomin, Zamorak, Armadyl and the Godless to work together to stop her. Vorago sent a Scopulus representative and aligned himself with the Godless, but he had no interest in their quest.

After numerous adventurers weakened Tuska, Vorago ventured out into space and temporarily empowered himself with Gielinor's anima to grow in size and strength. Vorago punched the goddess twice, further disorienting her before using more anima to unleash a powerful attack which killed her. Vorago kept the Scopulus there after the world window on Tuska's back powered up, should further dangers appear.

Sliske, who had been monitoring the events of his game, verified the kill, allowing Vorago to participate in his endgame. Vorago had no interest in possessing the Stone; he only came to ensure that the other gods could not claim the stone or harm the "earth soul". Due to Jas' influence over the maze, Vorago's power slowly diminished, though it was not as severe as some of the other participants. When he met the World Guardian, he admitted that his priority of protecting the "earth soul" was gradually fading, and he was able to recall various memories such as forgotten pasts, stories and a name he was unfamiliar with. He worried that he was not "the defeater" that he was; the World Guardian attempted to inquire about what he remembered, but Vorago refocused his efforts to protect the "earth soul" and departed.

Vorago would later meet Armadyl and Zamorak while traversing the maze. In his conversation with Armadyl, the latter attempts to propose an alliance, which he soundly rejected. Vorago regretted not intervening in Armadyl's battle against Bandos, as he considered his weapon an affront to the anima. Armadyl apologised and promised not to resort to such a method again, but Vorago simply stated that he did not care anymore as the damage was done, warning him that he would not allow him to endanger the anima again.

His conversation with Zamorak varies depending if Zamorak has his entourage or not. If Zamorak's entourage is with him, Vorago refused Zamorak's help, stating that he did not need him, much to Moia's anger. Vorago simply stated that Zamorak would simply betray him if they worked together, and his only interest was to keep the Stone from being used at all, and if possible, defeat Sliske. Zamorak expressed skepticism that Vorago could win, due to Sliske's power, but Vorago simply stated that Sliske had yet to beat him in combat. Zamorak departed with his entourage, not willing to risk a fight that was unnecessary. If Zamorak was alone, Vorago ordered him to move aside, which the god of chaos took as an insult. Vorago reminded Zamorak that he had lost his divine powers, while he himself remained fairly unaffected because he was created by the "earth soul", and that it would just take one death to end him. Zamorak, reminded of his near-death experience by Saradomin during the Battle of Lumbridge, backed down, though he stated that the Stone would be his, to which Vorago stated that he looked forward to fighting him.

If Vorago was the first to finish the first part of the maze, he eliminated his own entourage, though he did not take anyone with him in the first place. Regardless, Vorago was booted out of the maze in the second half and returned to the Borehole when the game concluded.

Since his reawakening, Vorago can be found in the Borehole, where he accepts challenges by those wishing to fight him. He fights them so that he can hone his combat skills in the event that he needs to defend Gielinor from those who would threaten it. When defeated, he simply reforms himself. 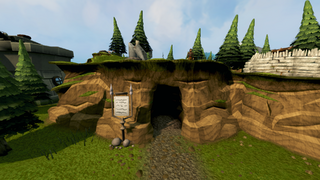 The entrance to the borehole

Vorago is located in the Borehole just north of Falador. The closest teleport is the Falador lodestone or Falador Teleport and its tablet version. The portal inside the Max Guild can be attuned to Vorago, arriving right at the entrance to the cave.

Vorago can be found at the Behind the Scenes during and after the Gower Quest where he is unattackable, but the player can talk with him.

Every world has the option to fight Vorago using either the world's public encounter or a private instance. Instances cost 1,000,000 (750,000 with the Soul Reaper perk) coins and last up to 1 hour. An instance can hold up to 50 players, and, due to the nature of the fight, respawn speed cannot be customised. Using an instance is the only way to fight Vorago in hard mode.

If Vorago is not currently fighting players for whatever session you are in, his face will be visible. Occasionally, he will be unoccupied but not visible, in which case speaking to him will prompt him to reveal himself. He can be challenged via right click or by going through the dialogue.

When challenged, all eligible players will be given the option to accept the fight. After 12 seconds, Vorago will unleash a blast dealing 70% of the player's health as damage (90% in hard mode). Players who do not accept the challenge will not be harmed by the blast. If challenged while he is already preparing to start a fight, the challenger will be notified of this and given the option to join the original fight. The fight will continue as normal even if a player dies to this blast.

Vorago's fight consists of 5 phases, each taking place in a different room, and each having their own mechanics and attacks. Vorago also possesses a special attack which determines how phase 3, 4, and 5 are fought. The special attack he uses lasts for one week, changing every Wednesday at 00:00 UTC. 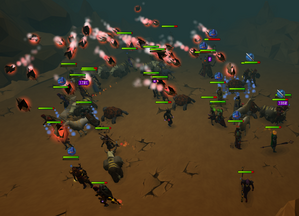 Vorago unleashes a barrage of red bombs after players receive the message "Welcome to hard mode."

The hard mode option for Vorago is unlocked after a player performs the finishing blow on Vorago with the maul of omens on all six of the weekly Vorago rotations (Ceiling collapse, Scopulus, Vitalis, Green bomb, TeamSplit, and The End). You can see which conditions you lack by reading the sign near the entrance to the borehole.

Hard mode is not available in the regular or basic instanced modes. To start up a hard mode instance, the player must use the instance interface and click "Hard Mode".

In hard mode, Vorago's health is still the same, however his attacks are increasingly powerful, and spawns a barrage of normal mode red bombs upon entry. In addition, when Vorago does a magic (blue bomb) attack he will always send two bombs instead of one.

Any special attacks (reflect, red bombs, TeamSplit etc.) will not have a warning message, with the exception of purple bomb detonation timers. His reflect attack damages both the targeted player and the aggressor, while his stomp attack reflects part of the damage their owner takes onto them. He has 11 phases, with all versions of phase 3 as separate phases (referred to as phases 3-8) and an additional phase on phase 5 (phase 10 and 11), where he needs to be mauled twice, one at the end of each phase. On phase 5 in normal mode (and phase 10 in hard mode) teams are required to push Vorago back 7 spaces to be able to maul him. On phase 11 in hard mode, this distance is doubled to 14 spaces.

If defeated in hard mode, he has a greatly increased chance of dropping the ancient summoning stone, tectonic energy, and seismic equipment. The person who has used the maul on him during phase 11 will receive the title [Name] the Defeater and also one piece of the Omens cosmetic override set per hard mode base rotation mauled if they have not already unlocked it.

Vorago's drops are given accordingly based on player roles in the fight, with three rolls that determine who gets that particular drop set:

The drop rolls are not limited to one per player; a player can occupy the DPS and bomb tank rolls, although this should generally not be the case in teams of 3 or larger. If the player who "won" a phase is missing by the end of the encounter, then the drop set will go to another player that survived the fight and is eligible for the drop - it could be the second highest DPS for that phase, or one of the tankers.

The location of the drop for each phase is illustrated in the table to the right.

A roll for tectonic energy is made for every drop slot. This is generally successful but not guaranteed.

Vorago drops 0–5 sets of charms, 5 charms per drop slot. The following percentages are calculated per set of charms dropped.

Every drop slot has the same table of standard loot. The rarities listed are per drop slot. 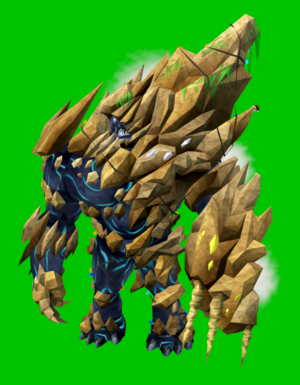 Vorago during the 2014 Christmas event