The Bandos warshield is a part of the Bandos armour set, requiring 70 Defence to wear. It is dropped by General Graardor and his bodyguards in the God Wars Dungeon.

Its stats are exceeded by the divine spirit shield, the chaotic kiteshield and the Malevolent kiteshield (which degrades after 10 hours of combat).

The shield is the melee equivalent of the Armadyl buckler and the ward of subjugation. It has identical stats to the blessed spirit shield, although the blessed shield has a higher prayer bonus and requires a quest completion to equip. It also has almost identical stats to the fully charged melee dragonfire shield, with the exception of a having a slight prayer bonus of +1. 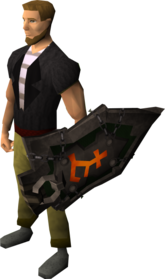