From the RuneScape Wiki, the wiki for all things RuneScape
Jump to: navigation, search
The Old School RuneScape Wiki also has an article on: osrsw:Dark bow
For this item's augmented variant, see augmented dark bow.
Dark bow? (edit)

The dark bow is the second most powerful shieldbow in the game, behind the Strykebow, and requires level 70 Ranged and 70 Defence to use. While it shoots at little over 7 seconds between attacks (double the time in between attacks (3.6 seconds) compared to other shieldbows), it shoots two arrows with each shot resulting in the same amount of arrows shot over time as any other shieldbow. It is a drop unique to dark beasts, which require level 90 Slayer to kill.

A wyrm scalp can be added to a dark bow to turn it into a more powerful strykebow. 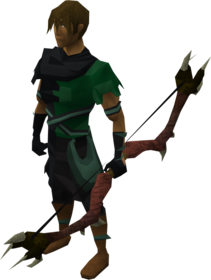 The dark bow can be used for the Archery competition minigame. It can also shoot as fast as a player can shoot the target and close the score window, allowing the dark bow to be just as fast as any other bow in this minigame.

It is not possible to use this bow for barbarian firemaking. Attempting to light a fire using a dark bow will prompt the following message: "The innate darkness of the bow sucks all heat from your firemaking attempt. You realise that this type of bow is useless for firelighting."

In a Guaranteed Content poll created by Jagex on 16 February 2010, the dark bow was nominated for a recolouring[1], similar to how the abyssal whip was recoloured (allowing the player to decide between four colours). The poll ended on 22 February 2010, with the dark bow winning with 24% of the votes.[2] The coloured versions of the bow are obtainable as a reward from the Barbarian Assault minigame. After Jagex said a new item was to be coloured, people suspected the dark bow would win the poll. As a result, the dark bow rose in price from 1.1m to 1.9m within a few weeks. The dark bow increased further in price just as the Abyssal whip did after the update.

On 29 March 2010, Commander Connad was updated so he would recolour dark bows because it was the Guaranteed Content poll winner. The colouring will make the bow untradeable; however, to remove the colouring, simply use a cleaning cloth and the bow will return to its regular state. Buying a colour for the dark bow and abyssal whip costs 50 points in any role. Once purchased, the colour can be used on either weapon as many times as needed. The dark bow has the same colour options as the whip: yellow, blue, white, and green.

Augmented variants cannot be coloured, nor can coloured variants be augmented.