The dragon kiteshield is a melee shield made of dragon metal. It can be obtained as rare drop from the Queen Black Dragon, as a reward from the Motherlode Maw, or from opening a metamorphic geode.

Due to the Evolution of Combat, the Toktz-ket-xil has the exact armour rating and life point boost, and is cheaper and lighter, thus making the dragon kiteshield a more expensive alternative. Compared with the Dragon sq shield, which is around the same price as the kiteshield, it is more convenient to use the kiteshield as there is no need for players to complete Legends' Quest to equip it, alongside having slightly superior stats. 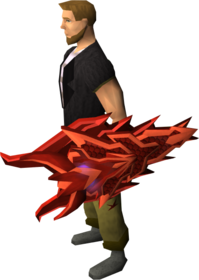