From the RuneScape Wiki, the wiki for all things RuneScape
Jump to navigation Jump to search
For the achievement, see Kindred Spirits (achievement).

Kindred Spirits is the fourth instalment in the Sliske quest series. The player helps Linza investigate kidnappings of several people, leading them to an encounter with Sliske and the Barrows brothers. The player is forced to participate in an intricate game involving morally ambiguous choices in order to save their friends, while also trying to unveil the true motives of Sliske.

Although the only quest requirement is Missing, Presumed Death, full completion of "Robber from the Darkness" story arc of Meg's cases was also required at release. Cases, being part of Mega May event, served as an introduction and a teaser for the quest, in which the mystery of stolen items and kidnapped people is resolved. Moreover, it contained a number of references to several other quests and world events, providing additional context for past events.

You can probably tell by the recent spate of mysterious disappearances that dark and twisted schemes are afoot in Gielinor (when are they not?). Find out what's going on as you puzzle your way through a twisted tale with an edge of dark humour.

Discover more about the history and lore of the Barrows Brothers as events take an even more sinister turn. Are things ramping up for Sliske's Endgame? Who is behind the disappearances and where is this all leading? Seeking the truth will strain your moral fibre - are you ready to play a little game? 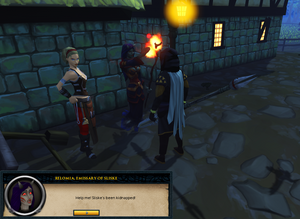 Speaking to Relomia in Draynor Village

To start the quest, speak to Linza, who is found at the smithy in Burthorpe south of the bank. She will explain that Brother Samwell, Major Mary Rancour, and Meg have all gone missing. She suggests that you speak to Relomia, Sliske's emissary, for a clue.

Teleport to Draynor Village and speak with Relomia in the square behind Ned's house. She will tell you that Sliske has also gone missing and tells you that he is being held at a Dragonkin prison near Daemonheim. Go to Daemonheim and head south-east, where a trapdoor will be seen near Linza. Open the trapdoor; a short cutscene occurs where you are captured by the Dragonkin. 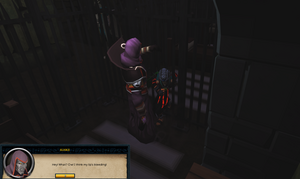 After the cutscene, you will find yourself in a cell beside Sliske's cell. Talk to him, and he will explain the Dragonkin are becoming more dangerous. After talking with him, interact with the Dragonkin guard outside; it will ignore you. Talk to Sliske again (any option works); after talking to him, interact with the guard. You will attempt to grab the keys while the guard is giving you food, but fail. Use the food on the latrine. You will notice that it reacts with whatever is down there, and you need to get it out.

Use the empty plate on a loose brick in your cell, and you will obtain two plate halves and a brick. Use the brick on one of the halves to get a blade, then use the blade on the bed to get a strip of cloth. Then use the cloth on the brick to create a ludicrous flail, and give it to Sliske. Sliske will grab the potion on the nearby shelf, resulting in the guard going into Sliske's cell and beating him up.

Pickpocket the guard while he is beating up Sliske. Talk to Sliske to get a strip of cloth, then use either the potion or Bag of Crystals on the latrine. Use the cloth on the empty bottle, then use it on the latrine to retrieve the acid. Talk to Sliske, who will distract the guard, then use the acid on the cell door. Open Sliske's door. He will then reveal that this was simply a ruse, telling you that the Dragonkin guard is just a wight in an elaborate disguise. 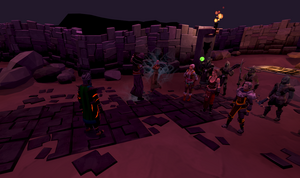 After Sliske reveals his ruse, leave the prison. Sliske tells you that he is playing a game and will award you with the Staff of Armadyl if you win. He then kills Brother Samwell to threaten the player into participating before you are taken to the first room. 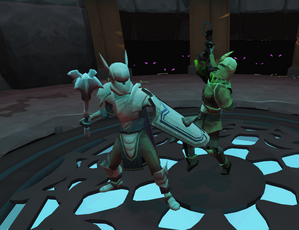 Enter the fighting pit and you will have two options: either to torture Dharok the Wretched or help him. If torturing him, simply release the gates imprisoning the Saradominist champion, which you take control of. The champion has different attack styles you can use against Dharok. Eventually, Dharok would be killed by the champion.

Alternatively, if helping Dharok, speak to him in the pit. Dharok tells you that he wants to get out of the pit, because he wants to stop fighting. To get through, tell Dharok to stop fighting and allow the Saradomin crusaders to kill him, by telling him that he is already dead. Once this is done, Dharok will die to the crusaders.

Regardless of choice taken, he realises his actions and now freed, asks you to save his brother Ahrim. 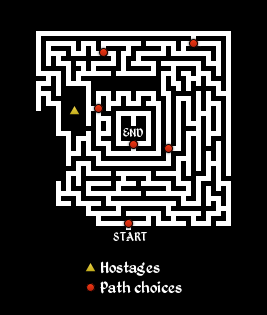 A map of the maze

Ahrim the Blighted is trapped in a maze, with the player controlling him. To help Ahrim, he must be led to the centre of the maze for a "reward" by Sliske. While traversing the maze, there will be six blue grates in the ground. When Ahrim steps on one, Sliske tells you that Ahrim must move in one of the two directions; one of them will blast Ahrim with blue flames, while the other will blast Meg, Linza or Rancour instead. It does not matter which way Ahrim goes, but at the end of the maze, if you successfully persuaded him to bear the flames at least four times, it will determine Ahrim's moral outcome. You can click through walls to get Ahrim to walk automatically along the maze to that point.

If you leave the area by any means, it will be completely reset when returning. 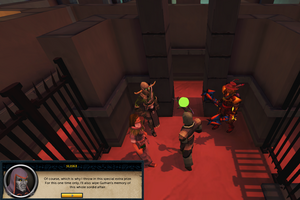 The end of the maze

Once Ahrim reaches the centre, he will put Isolde and Guthan the Infested inside. After bringing you into the room as a witness, another moral decision occurs: you can either allow the two brothers to argue or try to break the conversation up. At the end of the conversation, if four or more of the decisions in the maze resulted in Ahrim being blasted by blue flames, Ahrim will ask Isolde for forgiveness; otherwise, Ahrim will kill her. Regardless of your choice, Ahrim's games are finished and you will need to help Verac. 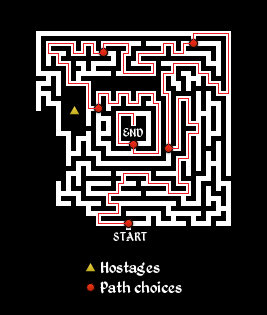 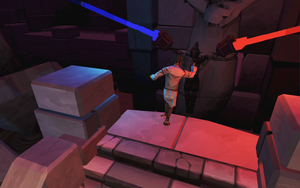 Taking the Saradomin key from Verac

Enter the door to your north. Upon entering, you will see Verac the Defiled being "pulled" apart by statues of Saradomin and Zamorak respectively. You are tasked with breaking Verac from his chains and freeing him. Verac will request for you to release the statue of Zamorak by having Linza, Meg or Rancour use the key maker to create the Zamorak key.

The Zamorak key will always break when used on the Zamorak statue. Instead, rip the Saradomin key out of Verac and use it on the Saradomin statue, collapsing it and revealing a second room. Speak to Verac, and you will automatically enter the room, Sliske's laboratory. 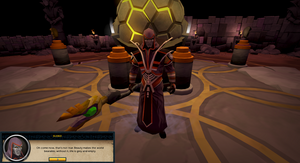 Sliske talks to an unknown character 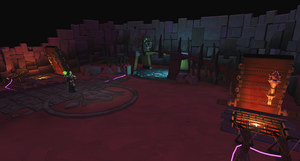 After the shadow focus is interacted with, you will see Linza, Rancour and Meg with the remaining three brothers. Guthan is inside a large metal ball balanced on top of a two-way slide, and Sliske tells them that Guthan is the "balance"; if he falls one way, he will kill Torag the Corrupted and Karil the Tainted, while if he falls other way, he will kill a former Saradominist commander, Commander Jaycliff, that Guthan unintentionally killed in a drunken stupor.

Go through all dialogue options with Guthan, or interact with the lever in front of Guthan, until you get the notification for Meg to impersonate the player (any style works). After her panicked impersonation, Sliske will become angry and enter the room. After the player arrives and Sliske sees through your lies, he attempts to drain the player's soul with the Staff of Armadyl. He'll discover that you know his secrets, and a short cutscene occurs where he brutally pummels the player, up close and personal. After the cutscene ends, Sliske will explain that Linza and Relomia worked together for this plot, much to the player, Meg and Rancour's shock. Sliske further explains that Linza had stolen the knowledge of dragon smithing and their ore, so Linza went to Sliske to bargain a deal for protection. Sliske then betrays Linza, and turns her into one of his wights. 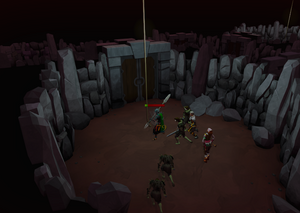 Escaping Sliske's lair, with Meg and Rancour in tow.

After Linza's deception, Sliske attempts to have you and the others killed, but the Barrows brothers refuse to help him, giving you time to escape. The player must escape with Rancour and Meg from the tunnels; there are 120 seconds to escape while rocks fall on their head. If the timer runs out, you'll start at the beginning, without restoring your health. If you die, it is an unsafe death and you will respawn in Death's office; players will want to bring food here, as damage can be anywhere up to 4000. It is highly advised to have Freedom and Anticipate on the ability bar, as rocks can stun the player for up to 10 seconds in addition to dealing quite some damage. Should you die in the tunnels, simply return to the trapdoor entrance in Daemonheim.

In several areas of the tunnels, there will be small groups of aggressive wights that will spawn when you near the location; they can be easily ignored as their combat level is too low to actually deal significant damage. There are three ropes leading out of the cave. Two of the ropes are unstable and will cause rocks to fall and stun you. The third rope will lead you out of the cave. The position of the stable rope is different for each player; using the mini-map, click on the ladder icons to run to each one and attempt to escape. There is a "Check Rope" option; the correct rope will be described as "sturdy".

Once the player escapes with Meg and Rancour, they will return to their normal duties. Speak with Dharok, who is on top of Karil's mound. (Make sure your inventory has 4 empty spaces; if it is full, the reward lamps can be reclaimed by speaking to Major Mary Rancour in Burthorpe.) Dharok tells the player that whatever they did, they have some slight freedom from Sliske's control. He also tells you that Sliske's control over Linza is slightly weaker, most likely due to the recent events, and that she can still be saved.

He tells you that the brothers will pretend that Sliske has complete control over them and will help the player out at the right time, and returns to his crypt. 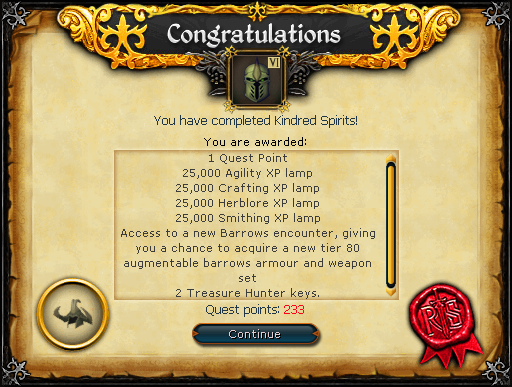 Kindred Spirits is directly required for the following quests/miniquests: