From the RuneScape Wiki, the wiki for all things RuneScape
Jump to navigation Jump to search
The Old School RuneScape Wiki also has an article on: osrsw:Armadyl crossbow
For this item's off-hand variant, see off-hand armadyl crossbow.
For this item's augmented variant, see augmented armadyl crossbow.
For other variants of this item, see lucky.
Item JSON: {"edible":"no","members":"yes","stackable":"no","stacksinbank":"yes","death":"reclaimable","name":"Armadyl crossbow","bankable":"yes","gemw":{"name":"Armadyl crossbow","limit":1},"equipable":"yes","disassembly":"yes","release_date":"5 September 2012","id":"25037","release_update_post":"God Wars: Remastered","lendable":"yes","destroy":"Drop","highalch":16000,"weight":1.814,"tradeable":"yes","examine":"A crossbow which was once the figurehead of Armadyl's army. In one battle, Saradomin managed to take the bows, and now keeps them as a trophy.","noteable":"yes"}Buy limit: 1

The Armadyl crossbow is a one-handed crossbow that requires 75 Ranged to wield. It was released with the God Wars Dungeon update in 2012, alongside other items such as the amulets of Saradomin. It is dropped by Commander Zilyana and her minions. The reason Commander Zilyana drops the bow is because she betrayed Kree'arra and stole it as a trophy, as described in the book Armadyl's Assault.

When received with CoinShare active, the Armadyl crossbow will be dropped as 120 Armadyl crossbow shards split evenly among the players and sent directly to their banks. 120 shards can be combined to create this item.

Players may instead chose to use the dwarven hand cannon as an alternative, as it is a tier 75 ranged weapon as well and has ammunition corresponding to its tier. The hand cannon also costs much less than the Armadyl crossbow and its off-hand counterpart, although the completion of Forgiveness of a Chaos Dwarf quest is required to wield the weapon. However, the hand cannon occasionally explodes without warning, although this can be mitigated by augmenting it. 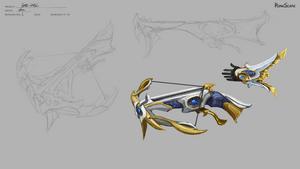