The ward of subjugation is an item worn in the off-hand slot. It requires 70 Defence to wear. Players attempting to obtain the item from these monsters also require an indirect requirement of 70 Constitution and either 60 Strength or Agility to enter the God Wars Dungeon. 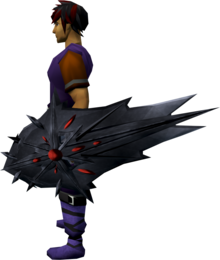 Not long after Zamorak achieved godhood, he became worried about his followers, which were not loyal to him and were planning to betray him the same way he did with Zaros. Seeing that, he visited Razulei in the Infernal Dimensions and requested the creation of the robes of subjugation, powerful robes imbued with cruelty. After they were created, Zamorak paid Razulei handsomely and gave them to his mages. His mages drew power from the clothes with the objective of overcoming him and were flooded with pain. Desperate to cease it, they drew even more power from the robes, but it only worsened the pain and it eventually killed them.

After Zamorak's banishment, his followers that wished to return him to Gielinor were loyal, so they could use the power of the robes without succumbing to pain, but prospering in the name of Zamorak.