From the RuneScape Wiki, the wiki for all things RuneScape
Jump to navigation Jump to search
For the achievement, see Har-Aken (achievement).
For the TzekHaar Front boss, see TzekHaar-Aken. 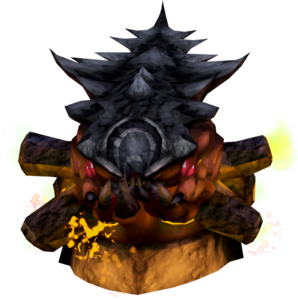 Har-Aken, lit. "Holy Kraken", is the final boss of the Fight Kiln combat minigame, encountered on wave 37 of the minigame. It was created by the elder god Ful to aid in constructing planets in the multiverse, although its purpose is not known. It does not attack players, but instead summons tentacles around the edges of the platform that pepper the player with ranged or magic attacks. In order to end the encounter, players must kill its head.

Players may also kill its TzekHaar variant, TzekHaar-Aken, for the purposes of a Har-Aken reaper task.

Defeating Har-Aken and completing the Fight Kiln rewards players with a TokHaar-Kal variant (depending on the player's most used combat style in the kiln), a prestigious cape only obtainable through completion of this minigame, a symbol to all players that they have defeated this boss and all difficult encounters before it. The alternative reward available to players is an uncut onyx, making this a very profitable minigame depending on the player's ability to defeat Har-Aken. There is also a 1/200 chance, with a threshold of 40, that you will find a volcanic shard if there is at least one free inventory spot.[1]

Obtaining all unique drops will unlock the title Kal-Haar-Xil [Name].

Har-Aken attacking the player with its Ranged Tentacles.

Har-Aken attacks with his numerous tentacles, and can only be defeated by killing his head. The tentacles come in two types; both may attack with melee, but at a distance they will attack with either Ranged or Magic, hitting up to 1094. They are level 800 and have 7000 life points each. The head itself will not attack and will surface without needing to damage any tentacles.

Har-Aken's head never appears on the northern side of the platform. It randomly surfaces at the eastern, southern, or western sides of the arena for 20 seconds before going back under for another 50 seconds, therefore it is recommended to position the camera on the north side so that the eastern, southern and western sides can be viewed simultaneously when Har-Aken resurfaces.

The fastest way of dispatching the boss is to activate a magic crystal, cast Vulnerability on the head as soon as it becomes attackable, and use Onslaught until the player's health becomes too low or the head submerges. Sunshine or Metamorphosis should be used the second time the head surfaces, and if Har-Aken is still alive at this point, Onslaught or threshold abilities can be used to kill the head when it surfaces for a third time.

If using a combat style other than magic, use Berserk or Death's Swiftness in place of Sunshine as well as their respective stat boosting crystals. Before using Berserk, however, the player should make certain that there is a low amount of tentacles within attacking range to avoid taking heavy damage. Har-Aken is a 5x5 enemy, making the Seren godbow special attack extremely effective if ranging.

A pack yak can be used for carrying more supplies if the player is inexperienced. For optimal kill speeds, a Ripper Demon should be used once the player becomes comfortable with using less food.

There are various monsters weak to melee and ranged in the previous waves, so it is highly recommended to bring all three combat styles to clear the waves faster before facing Har-Aken with the style of the player's choice.

Although Har-Aken does not drop any items directly, defeating it can reward the player with several items.