TokTz-Ket-Dill (roughly translated as Obsidian Armadillo Guard) is a quest where players are asked to defeat a monster terrorising the city of TzHaar. This monster's burrowing has already caused some tunnels within the TzHaar to collapse; it must be stopped before the entire city is threatened. 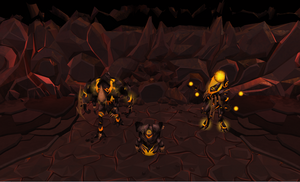 The quest starts in the TzHaar City, the entrance of which is found at the top of the Karamja Volcano. After entering the TzHaar City, go east as far as possible along the southern wall and then directly north, where a quest symbol will be seen on the minimap. Speak to one of the three guards (TzHaar-Mej-Malk, TzHaar-Xil-Tog or TzHaar-Hur-Frok) who are guarding a collapsed tunnel in the eastern part of the city, and ask them what has happened. They will explain that a big creature has been digging tunnels under the city and that TzHaar-Xil-Tog intends to kill it. Many TzHaar-Hur are trapped behind a collapse caused by the tunnelling. If the player already completed The Elder Kiln, they will describe a TokTz-Ket-Dill that they found on their way to the kiln. However, the TzHaar can't make a tunnel to rescue the TzHaar-Hur because that would risk another collapse. They need to stabilise the TokTz-Ket-Dill's tunnels so that they don't collapse, but the only entrance they've found is too small for them to enter. Offer to do it yourself. You'll have to stabilise the tunnels and kill the TokTz-Ket-Dill. 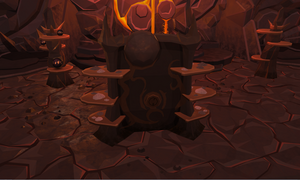 The 'books' in the back of the library 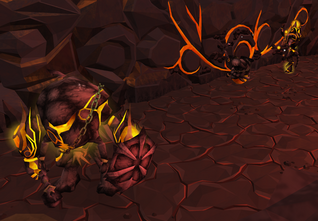 The TzHaar cast of the play!

Go back to the obsidian mine. Simply click on one of the striped areas of wall to the East of TzHaar-Hur-Brekt to obtain a piece of stone slab. Gather 17 stone slabs (it is recommended to have 3 extra in case you make a mistake). Create some stone pillars by using the left click option on the slabs; they reward 20 Crafting experience each. Spam clicking the last stone slab in your inventory will result in nearly all of them being crafted at the same time. You will need the pillars you've created to repair the tunnels.

Run back to your bank to gear up for the next part of the quest. This includes combat gear including the proper runes to deal with several enemies (water spells are effective) and a ranged weapon. You can use prayer.

Bank some pillars so you can take the 14 oak planks. After fixing a few tunnels, you may restock (note that you can't use a Beast of Burden to carry the pillars or the treated oak planks).

You will have an opportunity to visit a bank before fighting the TokTz-Ket-Dill, so unless your combat levels are low, you do not need to bring any food. 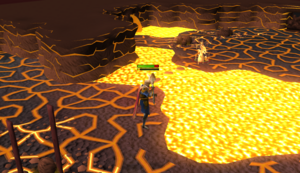 The lava and fire monsters.

The TokTz-Ket-Dill can slam its tail on the ground and cause the ceiling to fall onto players for 1000+ damage. If the player does not wear full melee armour, the player will not break through its shell, but it will continue to slam its tail on the ground, potentially killing the player very quickly. The attack deals typeless damage, meaning protection prayers have no effect on it. Although the monster can do it at any time, it appears to do it much more frequently if players are using prayer before the shell is broken. Players should not use prayer before breaking the shell. Players should use Protect from Melee after breaking the shell.

Head South out of the mine, and talk to any of the three TzHaar to finish the quest. 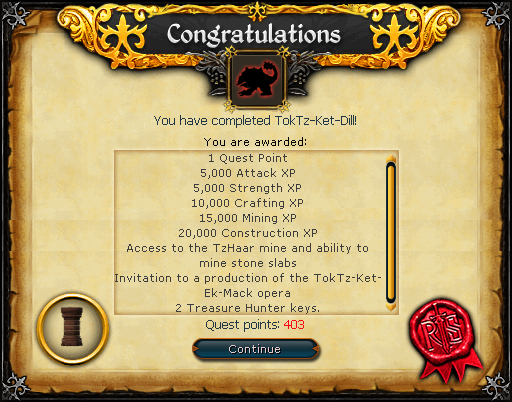 TokTz-Ket-Dill is not currently required for any quests or miniquests.