The cave wolf matriarch is a monster encountered during Carnillean Rising, in which Philipe Carnillean defeats it while the player distracts the wolf. After the completion of the quest, Claus the chef in the basement will assign you to kill the (now much stronger) wolf once more for her skull. You are then given limited access outside the cave again in which the juvenile wolves were in, and kill the cave wolf matriarch and both of her cubs. She will drop her skull, which can be given to Claus the chef, who lets the player choose one of the following rewards:

After she is defeated, she cannot be taken on again. Killing the matriarch and collecting the reward is a requirement for the completionist cape and the master quest cape. 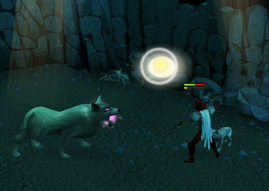 The matriarch uses a stronger version of her magic attacks if praying Protect from Melee or Deflect Melee, and an inaccurate melee attack if praying Protect from Magic or Deflect Magic. She also uses the special howl attack, which collapses the ceiling and is difficult to avoid due to the small size of the room. However, the howl attack deals minor damage relative to her other attacks. If you stand back while praying against magic (that is, ranging or maging), she will constantly use her special, and you will likely take a lot of fast-hitting damage.

The tanking strategy involves wearing armour with good melee defence, praying Protect from Magic or Deflect Magic, drinking potions, and attacking with melee, healing as necessary. By standing in one spot, the special attack will only hit 2 or 3 times per strike.

An alternative is to attack with magic or ranged then immediately run to the next corner of the room as soon as you attack, similar to the method used for soloing Commander Zilyana. If you pray against magic while using this method, you can avoid all magic and melee attacks and a significant portion of the damage from the collapsing attack.

Another strategy is to stand behind the juvenile wolves because she will not be able to attack you with melee, then activate Protect from Magic and tank the howl attack.

The cubs do not inflict significant damage, and should be ignored until the matriarch is dead. They can be killed for additional experience but it is unnecessary.

If you die while fighting the cave wolf matriarch, your gravestone will appear outside the Carnillean house.

The update history project is a work-in-progress – not all updates to this topic may be covered below. See here for how to help out!
Retrieved from ‘https://runescape.wiki/w/Cave_Wolf_Matriarch?oldid=32865426’
Categories:
Hidden categories: