The Saradomin sword is a two handed sword which requires level 75 Attack to wield. It can be obtained as a drop in the God Wars Dungeon, from the Saradominist general Commander Zilyana and her bodyguards, Bree, Growler and Starlight. Commander Zilyana wields this sword.

The Saradomin sword can be considered a crushing counterpart of the Zamorakian spear and the four godswords, which are stabbing and slashing weapons respectively, as all three weapons are tier 75 two-handed melee weapons which can be obtained from their respective generals in the God Wars Dungeon.

The Saradomin sword is a valuable mid-level crush weapon, as its attack speed is faster than most two-handed weapons at a rate of 3.0 seconds, the same speed as longswords, rapiers and shortbows.

When received with CoinShare active, the Saradomin sword will be dropped as 120 Saradomin sword shards split evenly among the players and sent directly to their banks. 120 shards can be combined to create this item.

As a Saradomin item, this weapon will pacify Saradominist minions in the God Wars Dungeon, as well as cause bandits in the Kharidian Desert Bandit Camp to become aggressive. It can also be used as one of the six Saradominst items to obtain the Holy Cithara after One Piercing Note. 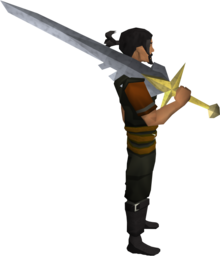