From the RuneScape Wiki, the wiki for all things RuneScape
< Gielinor Games
Jump to: navigation, search 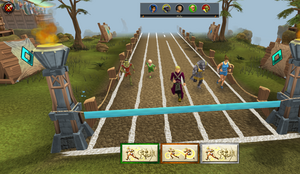 A player about to finish Head-to-Head

Head-to-Head was an event available during the Gielinor Games, released 24 July 2012. players could access it through the portal in Varrock Square. It was race with a twist, with each move determined by ability cards. The aim of the game was to complete the race in the shortest amount of cards possible. Agility experience was received upon completion of the race, as well as contribution points. The game could be attempted repeatedly for contribution points, but only a certain amount of agility experience could be gained daily, resetting after 00:00 UTC the next time the player logged in.

The player raced against a werewolf, a human, a goblin, and a gnome. One started with 3 random cards, and gained a random replacement after you've used one each turn.

A card will be one of six colours, each colour affects different opponents.

There are 90 abilities available, but duplicate cards occur, and you can only play one card per turn. Hover over each card to see what effect it has. 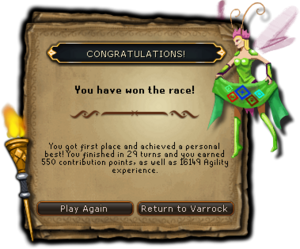 If the player and other athlete(s) reach the finish line in the same move, the player wins.

As the amount of points received is based purely on how few turns it takes to cross the finish line, there is sometimes a tactical advantage to the player allowing themselves and the other runners to fall behind their neighbours by one step. There are a number of cards which allow one or all runners to advance an extra step if they are exactly one step behind one of their neighbours, and careful planning with a little luck can allow the player to pull themselves forwards a couple of extra spaces.

If your aim is to finish a race in first place, a tactic that can be used is to get as many of your opponents "struggling" as you can. Then if the "Cramp" ability is used twice, it removes them from the race and lowers the amount competitors you need to beat. However, this may not be practical as Cramp is too rare. A rare combination that gets all opponents struggling simultaneously is a starting play of the card that advances the player by 3 steps, followed by the card that advances all players who are in last place at the cost of gaining a level of struggling.

If an athlete is removed from the game, cards of that colour still appear. Cards that affect their adjacent opponents, like Stepping stone, still take effect.

Here are the conditions all runners may receive during the race: 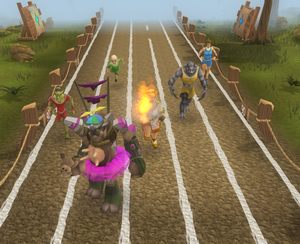 A Head-to-Head race is interrupted by a Troll "Streaker", wearing a pink tu-tu, strap-on udders, a propeller beanie, and carrying a teddy bear.
Retrieved from ‘https://runescape.wiki/w/Gielinor_Games/Head-to-Head?oldid=35543215’
Categories:
Hidden categories: