Smithing is an artisan skill through which players may create a wide variety of items from ore and metal bars. It is the companion skill of Mining, which generates raw material that are used in Smithing. Ores acquired from Mining are smelted into metal bars at furnaces and then hammered into items at anvils. Many smithable items are useful in combat, quests, and the training of a number of other skills such as Crafting and Fletching.

Smithing is divided into two distinct processes: smelting ores into bars and smithing those bars into various items. Both processes give Smithing experience. The metal bank is used to store up to a max stack of each type of ore and bar. Regular and noted items can be deposited into the metal bank. When smelting or smithing ores and bars are used directly from the metal bank.

A player smelting ore in a furnace.

Ores obtained from the Mining skill can be refined into metal bars at any furnace in RuneScape. The extreme heat exposure and pressure of a furnace is enough to melt the valuable metals contained within the various ores, separate them from the rock, and pool them into bars, which are extracted from the furnace as the final product. Each of the bars, except for gold and silver, are created from at least two ores.

Smelting gives a small amount of Smithing experience. The base smelting rate is one bar per four ticks (2.4 seconds); however, at higher Smithing levels, players unlock a 50 and then 100% chance of smelting bars in 3 ticks. Superheat Form can further reduce the time taken to smelt a bar by one tick. While wearing smelting gauntlets, bars are automatically deposited into the metal bank.

You can also equip the following items to increase your double bar chance:

A player forging metal bars into items at an anvil.

For a comprehensive list of smithable items, see this article.

Any of the many anvils scattered across RuneScape can be used to work bars into a variety of items. A hammer is required; one stored in the tool belt will work. While using an anvil players will make progress towards creating an item; indicated via a blue progress bar above their character. A base of 10 progress is awarded per strike of the anvil; with an item being created once the player has made sufficient progress to fill their progress bar. At certain levels the base progress per strike increases from 10 to 11 for some types of bar. A luminite injector can further increase this to 12.

Different types of items require different numbers of bars to make; the amount of time taken to smith an item and the experience gained from doing so scales with the number of bars required. For example, a longsword, which requires two bars, takes twice as long as to create as boots, which require one bar, but gives double the experience. Therefore, no matter which type of item is created from a type of bar, the experience per hour should remain around the same.

Boosts work to start an item. If the boost does not last for the entire time when creating the item, progress will be halved as long as the player's smithing level is lower than the level required to create the item.

Multiple heated unfinished smithing items may also be taken from the forge by reopening the interface after taking the first one and confirming the creation again.

Multiple unfinished smithing items can be made from the forge at the same time.

A yellow bar above the character displays how much heat is stored in the item being smithed. Heat decreases as the player works on an item but can be refilled at the forges which are located near to each anvil. In-progress items usually begin on 0 heat, but players with high enough Smithing levels will create items with the highest possible heat instead. The level required for each metal is shown in the following table.

Every time the anvil is struck, which happens every two game ticks, 10 heat is lost and some amount of progress is made. Maintaining a high heat increases the amount of progress made per strike. Progress is halved when forging an item without the required Smithing level - this can happen if a temporary skill boost was used to start smithing an item.

Refilling from 0-100% heat takes 6 ticks. For each type of bar, this decreases to 4 ticks and then 2 ticks, dependent on Smithing level. Players can also cast the Superheat Item spell on the unfinished smithing item to reheat it by 33% in 2 ticks without interrupting their smithing progress.

The smithing auto-heater can be used to help maintain low levels of heat; as it automatically refills 30% of a player's maximum heat every that time that heat is depleted. This uses five coal per refill, which is taken from the player's inventory or ore box. Superheat Form can be used in conjunction with this to maintain medium heat. 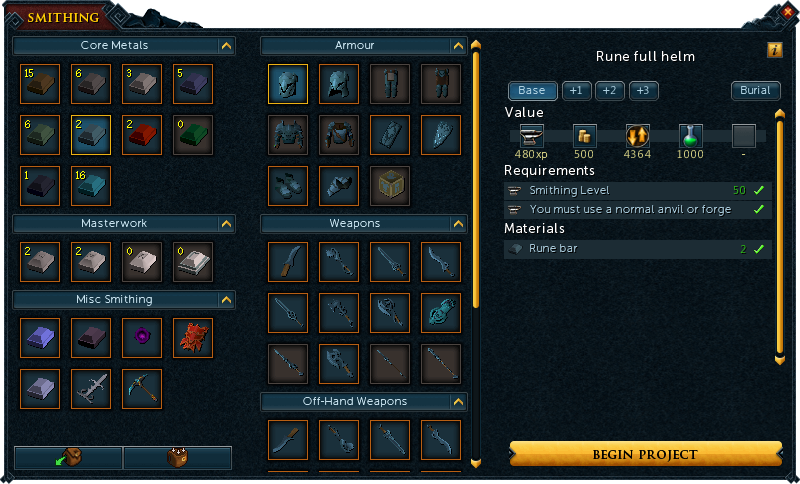 The smithing interface of an Anvil with the available upgrade tiers of a Rune full helm shown in the top right.

Regular items created through Smithing are "base items". Base items can be upgraded a number of times, dependent on the metal tier/type.

Each upgraded item is created from the previous version and a number of bars. The number of bars required is dependent on the type of item being upgraded. An upgraded item's tier is increased by 1, but the levels required to use the item remain the same. To upgrade an item, bring the previous version to a forge (along with the needed bars in then inventory or metal bank). Click the forge to bring up the smithing interface and select the metal and item being upgraded. At the top of the item information panel on the right, select the appropriate upgrade tier. For a base item, such as an adamant full helm, "+1" should be selected. For a "+1" item, instead select "+2", and so on. Then start smithing by clicking "Begin Project".

Starting an upgraded item on an anvil will attempt to rework the item at 0% heat. Before reaching the level required to create items of a given metal at full heat (see table above), a forge should be used to start and heat the item before using it on an anvil.

A final upgrade tier, called "Burial", is described in the next section.

Upgrading equipment requires a differing amount of progress from the base item, while requiring more bars, meaning more experience per hour.

At level 40 Smithing, players will unlock the ability to create burial equipment at the Artisans' Workshop using adamant equipment or above. Once a piece of smithed equipment is fully upgraded to its highest tier, it can be heated and reworked at a burial anvil into burial equipment. This destroys the equipment whilst using no extra materials and providing the same experience as upgrading the item to the highest tier.

Armour can also be buried as a complete set by selecting burial armour in the Smithing interface of the anvil, providing the cumulative experience of burying each item individually. To assemble a burial set, the upgraded full helm, platebody, platelegs, gauntlets, and armoured boots must be in the inventory.

As mentioned previously, the bar cost for an item has a direct effect on the total progress that the player is required to make, and the experience that is gained from doing so. While smithing an item the anvil is struck every 2 ticks, and each strike grants progress based on the player's current heat. Upon each strike 10 heat is lost and experience is gained. The amount of experience gained is uniform throughout the process. Once the required amount of progress has been made, the finished item is created.

The maximum boost to progress swings, assuming one is working on elder rune items, can be attained by having:

The average progress that can be made with all maximum boosts in 1 hammer swing of 2 game ticks (1.2s);

Without the Smithing Cape reheat perk is:

With the Smithing Cape reheat perk via diligent casting of Superheat Item every 2 ticks on the heated item is:

With level 99 Smithing and having made Elder Rune Armour—Full Helm +5, Platebody +5, Platelegs +5, Gauntlets +5, Armoured Boots +5—players can create tier 90 power armour called masterwork armour. The process of creating the armour is complicated and time consuming, and gives only token experience as it is not intended to be a training method for the skill. Masterwork armour can only be made after completing the achievement It Should Have Been Called Aetherium - making a full set of elder rune equipment + 5. Upgrading all single pieces from +4 to +5 will unlock this achievement. The achievement is a requirement for the completionist cape.

Masterwork armour can be upgraded to tier 92 trimmed masterwork equipment. This is done by adding masterwork trim; which is created from elder rune bars and the components obtained from melting down torva equipment and malevolent armour pieces. The process is quicker than creating masterwork armour, but still requires level 99 Smithing as well as the completion of the quest While Guthix Sleeps.

At level 90 Smithing players can create armour spikes from elder rune bars. Armour spikes are consumable items that can be stored in the ammo slot or inventory. Each time that the player is attacked by an enemy on an adjacent square, damage is dealt. The amount of damage dealt is dependent on the player's Smithing level.

The following items provide additional experience or other beneficial effects when smelting bars or smithing equipment.

The Blast Furnace is a minigame located in Keldagrim that closely involves the Smithing skill. Players operate a large furnace with which to smelt ores. Its benefit is the ability to smelt bars from iron to rune without using secondary ores such as coal or luminite.

The Artisans' Workshop is a social hub and guild for the Smithing skill. It contains conveniently located anvils and forges and a bank for Smithing training. the eastern part of the building forms the guild, which has a level 40 Smithing requirement to access. Here players can make burial equipment on the burial anvils. Fully upgraded armour items are worked using no additional materials in a process that requires half the progress of creating the maximum tier item, while also giving the same amount of experience as is given by creating that item. The item is then destroyed. The best use of this is to create burial armour sets; this is the best Smithing training method available.

Other uses of Smithing[edit | edit source]

A player using the Smithing skill to forge a dragon platebody.

A player wearing a Smithing cape (t) and performing the Skillcape emote.

Upon reaching 99 Smithing, players may buy the Smithing Cape of Accomplishment from Thurgo in his house near Mudskipper Point for 99,000 coins.

Smithing is currently ranked #17 out of 26 among skills in which players have level 99. This makes it somewhat rare, possibly due to the large investment of time and/or money required to train the skill.

Note that while an unfinished item made using a temporary boost can be worked on after the boost has faded, no experience will be gained and progress will be halved.

Like all skills, there is a skilling pet obtainable from training this skill. The pet for the Smithing skill is called Smithy.

Smithing Level up
The sound that plays after gaining a Smithing level.