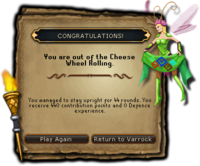 Cheese Wheel Rolling was an activity available during the Gielinor Games. It could be accessed by entering the portal in Varrock Square. 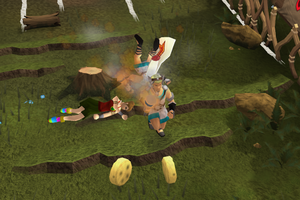 The gameplay consisted of running though a course filled with many obstacles from rocks, logs, to even another player's cheese wheel. The main goal was to get to the finish and catch your cheese wheel. The objective was to stay upright for 50 rounds. Defence experience and contribution points were earned from this event, amount dependent on rounds survived.

The amount of contribution points given is 10 x Rounds Ran, 11x if using the Herculean gold ring.